Pakistan Will Disintegrate If It Keeps Supporting Terrorism: Rajnath Singh

Imran Khan, while speaking in Muzaffarabad in Pakistan-Occupied Kashmir on Friday, had asked the Pakistani people not to march toward the Line of Control until he asks them to. 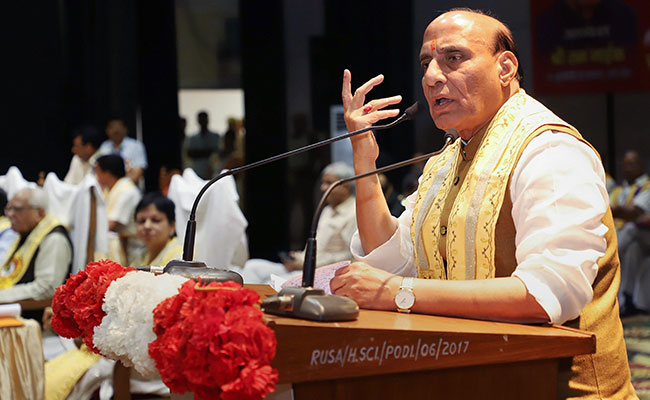 Pakistan should stop promoting terrorism otherwise no one will be able to prevent its disintegration, Defence Minister Rajnath Singh said on Saturday.

Speaking at an event in Gujarat , Mr Singh warned Pakistan that if its people cross the Line of Control, the Indian Army will not let them return.

"Pakistan Prime Minister Imran Khan has given a good advice to his people not to cross the Line of Control because Indian soldiers are ready and will not allow them to return," he said.

Mr Khan, while speaking in Muzaffarabad (Pakistan-Occupied Kashmir) on Friday, had asked the Pakistani people not to march toward the Line of Control until he tells them to.

Mr Singh also said Pakistan was unable to digest India's decision to abrogate Article 370 provisions and went to the United Nations to mislead it.

The international community is unwilling to believe what Pakistan is saying, he said.

India's minority population increased after Independence, while rights violations keep taking place in Pakistan against Sikhs, Buddhists and others.

India's minorities were safe, are safe, and will remain safe, he said, adding that India does not divide people on the basis of caste or religion.

No one would need to break Pakistan, it will break into pieces itself, the minister said.

Pakistan should stop promoting terrorism, otherwise no one can stop it from breaking into pieces, Mr Singh said.