No Power Can Stop Kashmiri Pandits From Returning To Kashmir: Rajnath Singh

Addressing a rally, the senior BJP leader also asserted that no power can now stop Kashmiri Pandits from returning to Kashmir as he strongly defended the Modi government's decision to reorganise Jammu and Kashmir and scrap its special status under Article 370. 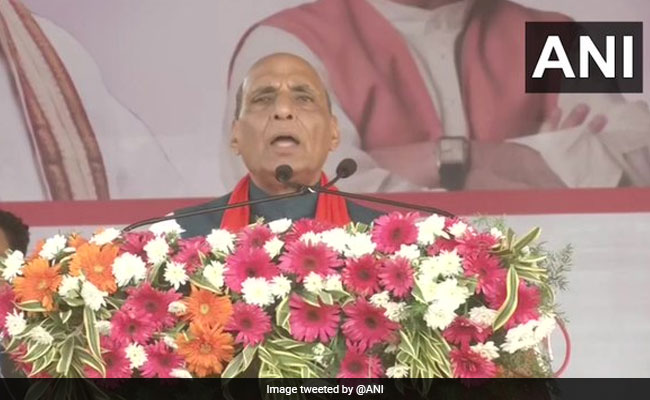 Taking on opposition parties, Defence Minister Rajnath Singh on Monday asked them not to make the "constitutional blunder" of passing resolutions against the CAA in state assemblies where they have a majority and advised them to not forget "Rasthradharma" for their "vipakshdharma".

Addressing a rally, the senior BJP leader also asserted that no power can now stop Kashmiri Pandits from returning to Kashmir as he strongly defended the Modi government's decision to reorganise Jammu and Kashmir and scrap its special status under Article 370.

He also sent out a strong message to Pakistan, saying India will not touch anyone but if someone bothers it, then it is not going to let them live in peace.

Making a strong defence of the amended Citizenship Act, he said it is not a law to hurt the sentiments of any religion but to give relief to victims of religious persecution in non-secular countries like Pakistan, Bangladesh, and Afghanistan.

Prime Minister Narendra Modi who has given the slogan of ''sabka sath, sabka vikas and sabka vishwas'' will never discriminate on the basis of religion, he said, adding that no harm will come to the citizenship of Indian Muslims.

The Opposition raises the question that if Hindus, Sikhs, Buddhists, Jains, Parsis, and Christians can be given citizenship, then why not Muslims of these three countries, he said.

Amid decision by many states ruled by opposition parties to not implement the CAA, he said it is a central law and has to be followed by everyone.

"Some opposition parties are passing resolutions in assemblies (where they have a majority) that their states will not implement the Citizenship Amendment Act. I want to appeal to them not to do such things. This is a constitutional blunder. Please do not do such blunder," he said.

Accusing the Congress of misleading people on the issue, he said the party should not forget its "rashtradharma" (national duty) for the sake of its "vipakshdharma"(duties as opposition party).

Referring to the exodus of a large number of Kashmiri Pandits from the Valley in the late 1990s at the height of militancy, Rajnath Singh said no power can now stop them from returning to their homes.

Rajnath Singh noted that Adnan Sami, who has been given Padma Shri award, was given citizenship when he was the home minister in the first Modi government.

On the CAA, he said that the Congress Working Committee in November 1947 had passed a resolution that refugees from Pakistan should be given citizenship. "So, why to object now," he asked.

Rajnath Singh said India now stands among the world's strong nations and added that it will become a 5-trillion dollar economy by 2024.

While PM Modi has tried to improve relations with other countries, a neighbouring country is not following the duty of a neighbour, he said in an apparent reference to Pakistan.

Whatever promises the BJP has made, its government has fulfilled them, he said, be it repeal of Article 370, construction of Ram temple or removal of the practice of triple talaq.

"We will follow the constitutional methods. No power can stop the construction of Ram Mandir now," he said.

Article 370 was supposed to be a temporary provision, he said.

He said Pakistan cannot dare to raise Kashmir on international forums now after Article 370's nullification and asserted that if talks happen with Pakistan, then it will be on PoK.