"Rajinikanth Won't Use His Influence To Back BJP": P Chidambaram 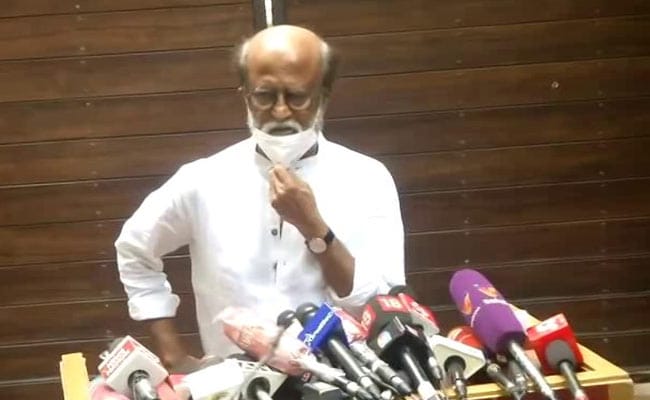 Expressing happiness that his friend, Rajinikanth, had decided to not enter politics in view of his health, veteran Congress leader P Chidambaram said the 70-year-old superstar was a "devout Hindu, but a secular man" and unlikely to support the BJP.

The reaction was among the many that came from political parties in Tamil Nadu where elections are due in months and alliances have started to show strain.

Mr Rajinikanth's decision to stay away from electoral politics, taken days after he was hospitalised amid a coronavirus scare, has created buzz about who the 70-year-old would support to "serve the people without entering politics", like he said in his emotional letter released today.

"I am happy for Mr Rajinikanth. I have been his friend for many years, going back to 1996. I had advised him earlier that he should not enter politics directly... He was a strong moral influence in 1996, and he can still be a strong moral and ethical influence in 2021 and in the future," Mr Chidambaram told NDTV.

Asked if he would back the BJP, as the party had hoped ahead of the elections in Tamil Nadu where its prospects seem to have run into choppy waters over differences with ally AIADMK, Mr Chidambaram said, "I am sure he will bear his support in favour of parties that oppose the BJP."

"He is a devout Hindu, but secular. His broad fan support constitutes the Dalits, OBCs, minorities. He understands the plight of underclass of India," said the former finance minister, who has been severely critical of the national dispensation's decisions.

The BJP has chosen to remain distant on the subject as a "practical party", but said the decision would definitely bring relief to the two pillars of Tamil Nadu politics - the AIADMK and the DMK.

"Both AIDMK and DMK would have heaved a sigh of relief as he would have eaten into their votes. The national parties have no hold in Tamil Nadu... BJP is not disappointed... Tamil Nadu is known to be a state where a lot of film stars have become successful politicians... We know how Jayalalithaa, Kalaignar (M Karunanidhi), MGR came to power and how people adored them. They saw Mr Rajinikanth as perhaps the only person who could replace them... with a new style of governance free of corruption and many other ills that seem to have befallen Tamil Nadu," said Lalitha Kumaramangalam of the BJP, which has no representation in the state Assembly.

"At some stage before the elections he may come forward (and support a party). But all that's speculation," she added.

Wanting to avoid a repeat of 1996 - when Mr Rajinikanth's statement "If Jayalalithaa is voted back, even God cannot save Tamil Nadu" resulted in her defeat - the AIADMK responded saying the superstar's influence was "overhyped".

AIADMK spokesperson Apsara Reddy said, "I've always voiced my concern for his health, and I wish him well. He should have launched his party to have any significant impact as a politician. We overhyped him as a political product. If he was a vote-catching machine all his films would have done well. Politically, he was not a great threat to us at least. The last two governments were progressive government by Jayalalithaa madam and people would not have voted for him in terms of a leader."