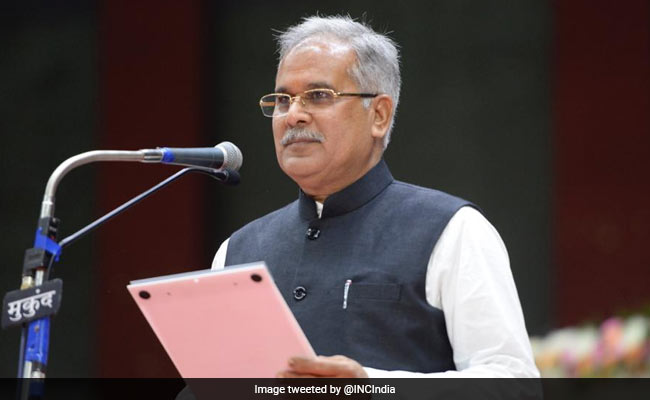 Bhupesh Baghel has been sworn in as Chhattisgarh's new chief minister

However, three prominent opposition leaders - Mamata Banerjee, Akhilesh Yadav and Mayawati - are among those conspicuous in their absence from the three grand events.

Here are the highlights on the swearing-in ceremonies of the chief ministers of Rajasthan, Madhya Pradesh and Chhattisgarh:

Dec 17, 2018 22:38 (IST)
Farm loan waiver be implemented within 10 days, as Congress president Rahul Gandhi had announced, says Chhattisgarh Chief Minister Bhupesh Baghel, quoted by news agency ANI. Minimum Support Price or MSP for maize will be increased to Rs 2,500 from Rs 1,700 per quintal, according to ANI. These two decisions were taken today, he said.
Dec 17, 2018 21:05 (IST)
TS Singh Deo and Tamradhwaj Sahu, both contenders for the post of Chhattisgarh chief minister, were also sworn in as ministers. 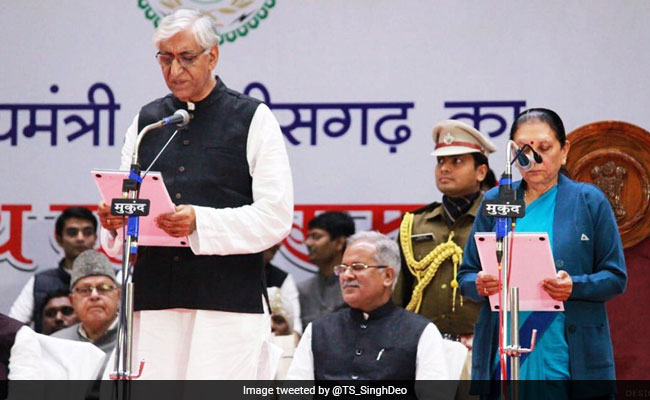 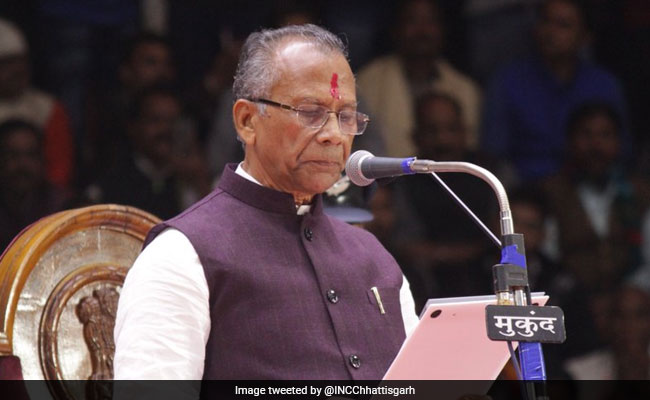 Read Here: CM Of Madhya Pradesh: At Kamal Nath's Oath, Predecessor Shivraj Singh Chouhan Wins Hearts
The oath ceremony of Kamal Nath presented a glimpse of rare courtesy and grace in politics as BJP's Shivraj Singh Chouhan, the three-time Chief Minister of the state, took an active part in the event to pass the baton to his Congress successor. Invited on stage, the 59 year-old, who had been fondly called "Mama" by the people of the state, was photographed with his successor and Jyotiraditya Scindia, their linked arms raised in jubilation.

Bhupesh Baghel takes oath as the next Chief Minister of #Chhattisgarh

Mr Baghel took charge of the state Congress in 2014 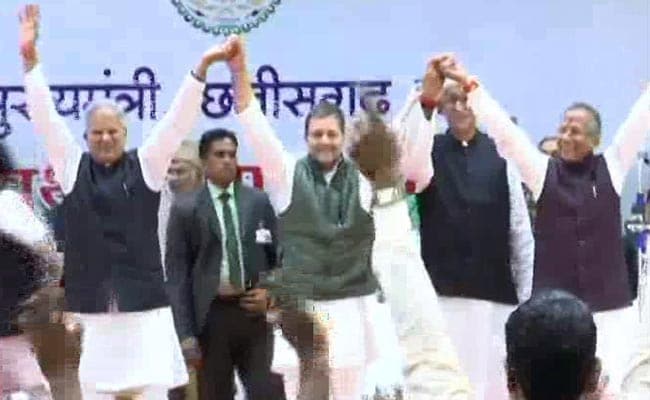 Read Here: Rahul Gandhi, Opposition Leaders On Gathbandhan Travels For Oath Events
Rahul Gandhi sat in the front seat - with former prime minister Manmohan Singh - as he travelled with a busload of opposition leaders to three oath ceremonies.
Dec 17, 2018 17:58 (IST)
Madhya Pradesh CM: "It doesn't bother you when you waive off loans of huge industrialists," says Kamal Nath
"I want to ask the banks and economists that when you waive off loans of huge industrialists, it doesn't bother you but when it's about farmers, then you get a stomach ache?" said Kamal Nath. 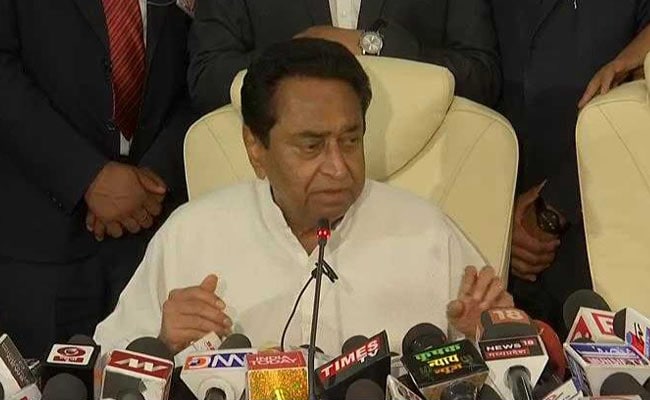 Dec 17, 2018 17:57 (IST)
Madhya Pradesh CM: Kamal Nath says "In many places, delivery systems are complete failures"
"In many places, delivery systems are complete failures no matter how good the policy is," says Kamal Nath, who was sworn-in as the Madhya Pradesh chief minister.
Dec 17, 2018 17:55 (IST)
Madhya Pradesh CM: Kamal Nath says corruption starts "in our village level"
Kamal Nath, in a press conference after being sworn-in as chief minister, said that he is "not going to spare a single officer who doesn't do the work they are supposed to."
"Corruption today starts in our village level. We have to fix that," he said.
"Madhya Pradesh has voted for change. We have to live up to it," he added.
Dec 17, 2018 17:52 (IST)
Madhya Pradesh CM: "I am the cabinet today," says Kamal Nath
Kamal Nath, during a press conference, says that farm loans worth Rs two lakh have been waived, as promised. He said, "I am the Cabinet today, there is no other minister." Mr Nath's cabinet is yet to be sworn in.
"We need to enhance economic activity. People should have a chance to establish their own business," he said.
Dec 17, 2018 17:40 (IST)
CM Of Chhattisgarh: Swearing-in ceremony of chied minister designate Bhupesh Baghel delayed, venue changed
Incessant rain in Chhattisgarh's capital Raipur since Monday morning has led to a change in the venue of the swearing-in ceremony of the new chief minister, an official said, according to news agency Press Trust of India.

The oath taking ceremony of Congress leader Bhupesh Baghel as the new chief minister has been shifted from the Science College grounds to Balbeer Juneja Indoor Stadium in Raipur's Budhatalab area in view of rainfall, the official told PTI.

Arrangements are being made for the programme at the new venue, he said.

According to the weather department, cyclone Pethai has affected the weather of Chhattisgarh and that has resulted in rainfall in the capital.

"In view of cyclonic storm 'Pethai' over Bay of Bengal off Andhra coast, light rainfall over Raipur is likely to continue till Monday evening. There is forecast of light rainfall over the state capital during the next 24 hours," said Prakash Khare, Director, Meteorological Centre, Raipur. 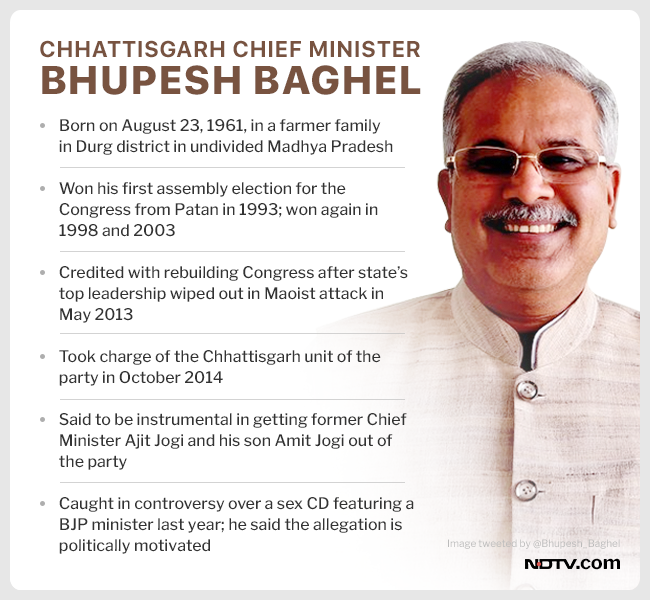 Read Here: CM Of Madhya Pradesh: Kamal Nath Waives Farm Loans, Hours After Taking Oath
Madhya Pradesh Chief Minister has waived off the loans for farmers in his state, two hours after he took oath as the chief minister. The promise of farm loan waiver was made by the Congress during the election campaign in Madhya Pradesh.
Dec 17, 2018 17:24 (IST)
CM Of Madhya Pradesh: Kamal Nath signs farm loan loan waiver of upto Rs 2 lakh
Kamal Nath's first decision as chief minister was to sign farm loan waivers worth Rs 2 lakh from nationalised/co-operative banks till March 31st. He took the decision within the first few hours of taking oath.
Dec 17, 2018 17:10 (IST)

Read Here: Deputy CM Of Rajasthan: Sachin Pilot Wears Traditional Turban While Taking Oath After 2014 Pledge
In a declaration that the Congress was back in the saddle, Rajasthan's new deputy chief minister Sachin Pilot, who had pledged not to wear a turban till his party returns to power in the state, proudly sported a red bandhej safa on Monday.
Dec 17, 2018 16:59 (IST)
CM Of Madhya Pradesh: Kamal Nath signs farm loan waiver files after being sworn in as chief minister
Kamal Nath has, after being sworn-in as Madhya Pradesh chief minister, has signed documents for farm loan waivers in the state, according to news agency ANI.
The Congress had earlier promised farm loan waivers for all the three states of Rajasthan, Madhya Pradesh and Chhattisgarh after it won the assembly elections in the states. 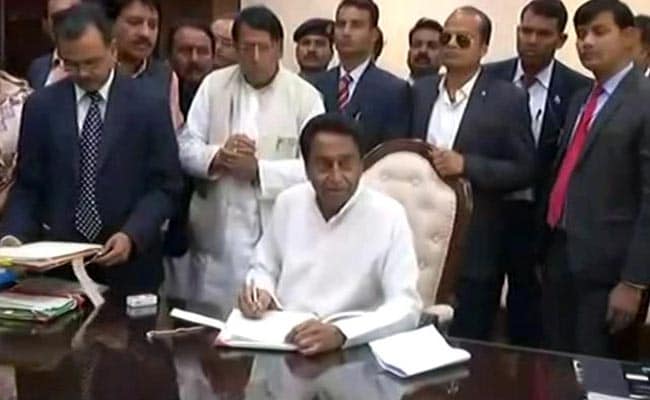 Read Here: CM Of Madhya Pradesh: Kamal Nath's Takeover As Chief Minister Today In Shadow Of 1984 Riots
1984 anti-Sikh riots: Kamal Nath's formal takeover as chief minister of Madhya Pradesh took place today in the shadow of protests over his alleged role in the 1984 anti-Sikh riots, for which another Congress leader, Sajjan Kumar, was convicted.
Dec 17, 2018 16:30 (IST)
Deputy CM Of Rajasthan: Sachin Pilot wears 'safa'. He had pledged not to till Congress returned to power
In a declaration that the Congress was back in the saddle, Rajasthan's new deputy chief minister Sachin Pilot, who had pledged not to wear a turban till his party returns to power in the state, proudly sported a red bandhej safa on Monday, according to news agency Press Trust of India. Clad in white kurta-pajama with white Nehru jacket, Mr Pilot donned the traditional turban while taking the oath of office.

The 41-year-old leader, who won Tonk assembly constituency in the recently concluded assembly elections, had pledged in 2014 not to wear the traditional turban till the party returns to power in the state. 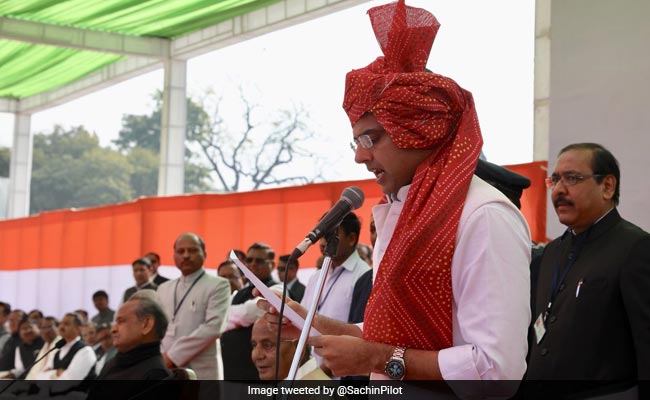 Dec 17, 2018 15:47 (IST)
CM Of Chhattisgarh: Venue of chief minister designate Bhupesh Baghel changed due to bad weather
The venue of the oath-taking ceremony of chief minister designate Bhupesh Baghel has been changed from Science College ground due to continuous rainfall.
The venue has been changed to Balbir Singh Juneja Indoor Stadium in Raipur.
Dec 17, 2018 14:39 (IST)
'United' Opposition
The opposition leaders are on stage, holding hands and waving at the crowd. 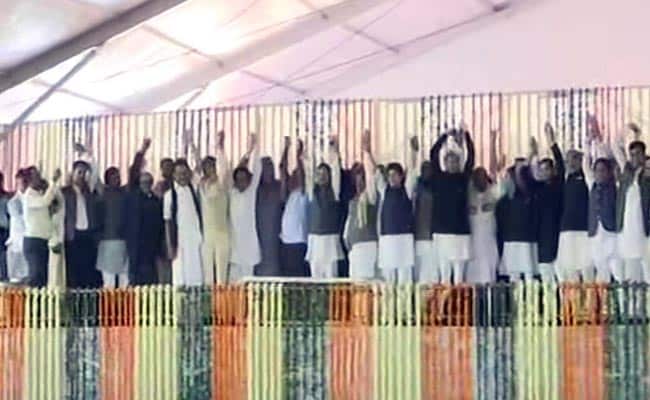 He is being administered the oath of office. 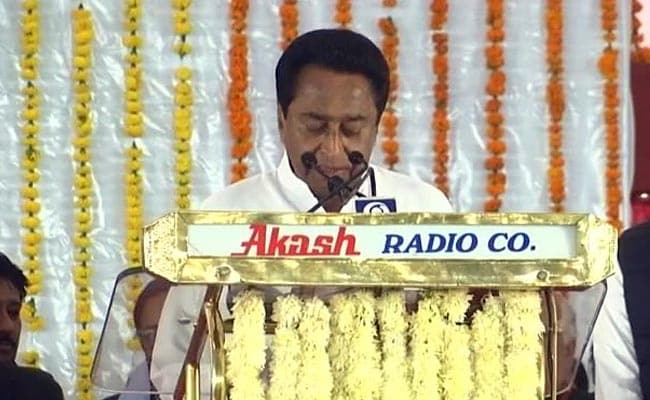 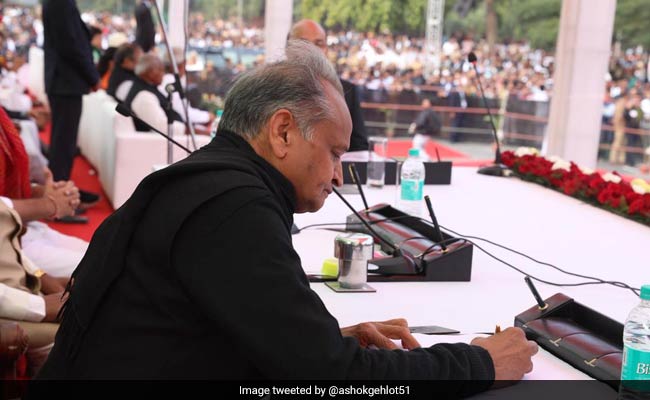 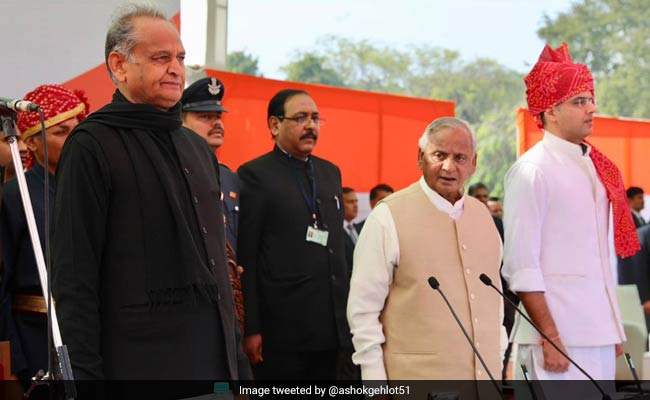 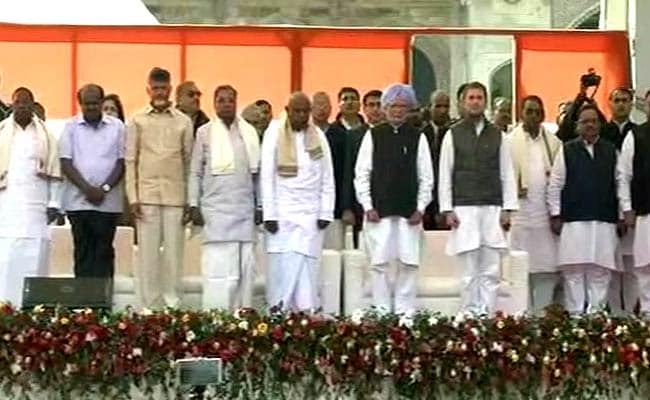 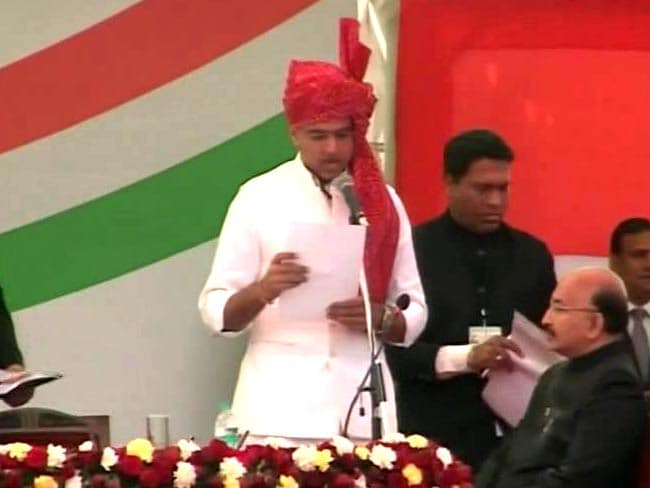 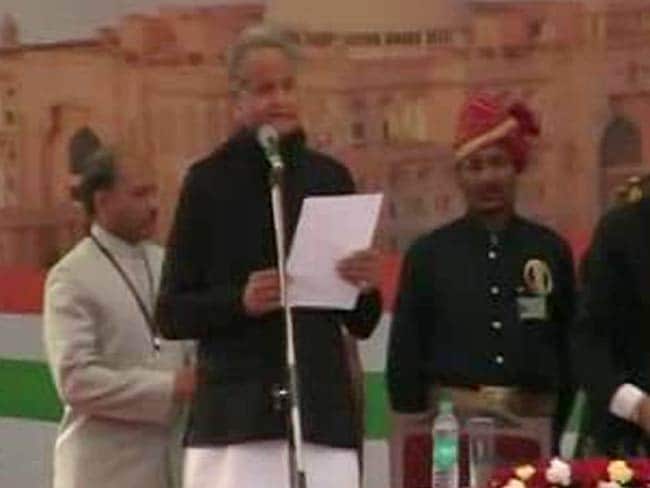 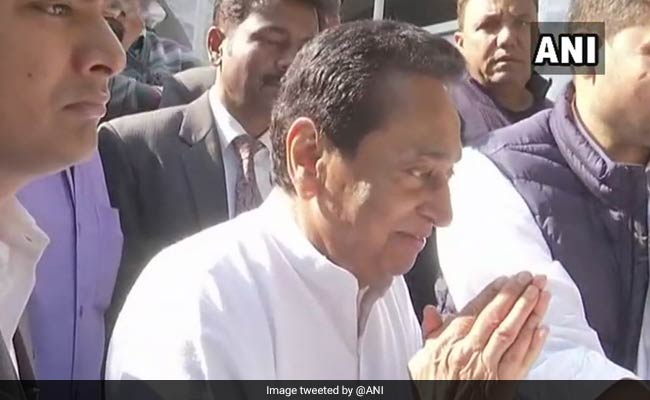 Dec 17, 2018 10:25 (IST)
Former Chief Minister Vasundhara Raje, is attending the swearing-in ceremony at Albert Hall. She has reached the venue. Dec 17, 2018 10:19 (IST)
Congress President Rahul Gandhi and former prime minister Manmohan Singh have reached Jaipur for the swearing-in ceremony of Rajasthan Chief Minister-designate Ashok Gehlot and Deputy Chief Minister-designate Sachin Pilot.
Dec 17, 2018 10:16 (IST)
Did You Know?
Albert Hall, the venue of Ashok Gehlot and Sachin Pilot's swearing-in today, in an imposing British-era structure. Albert Hall houses a museum which is popular with tourists.
The oath-taking ceremony will be held in the open at Albert Hall. 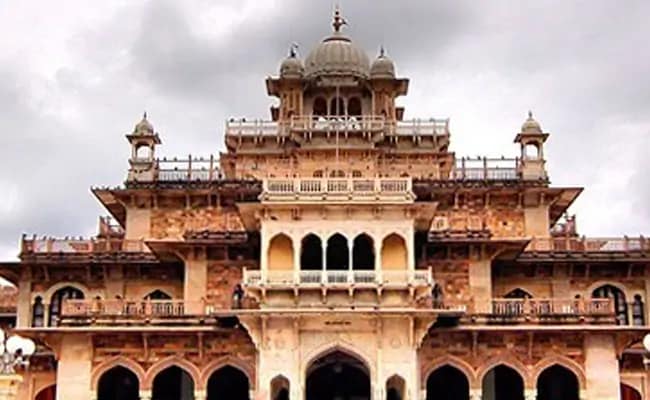 I think Mr Akhilesh Yadav will be there, don't know his final status. Ms Mamata Banerjee won't be able to come due to personal issues. They're all sending senior party leaders as representatives: Kamal Nath to NDTV

Dec 17, 2018 09:57 (IST)
Ms Mayawati isn't going to be able to come (to the swearing-in ceremony) due to genuine health issues. I don't think she is sending any signals by not coming: Kamal Nath to NDTV
Dec 17, 2018 09:54 (IST)
Ashok Gehlot and Sachin Pilot will go the airport to receive Rahul Gandhi and bring him to Albert Hall, the venue for the swearing-in ceremony.
Dec 17, 2018 09:52 (IST)
One significant guest at the Rajasthan ceremony will be Sanjay Singh of Arvind Kejriwal's Aam Aadmi Party. His presence will add to theories that the AAP and Congress are trying to overcome years of acrimony in a bid to see the BJP defeated in 2019. 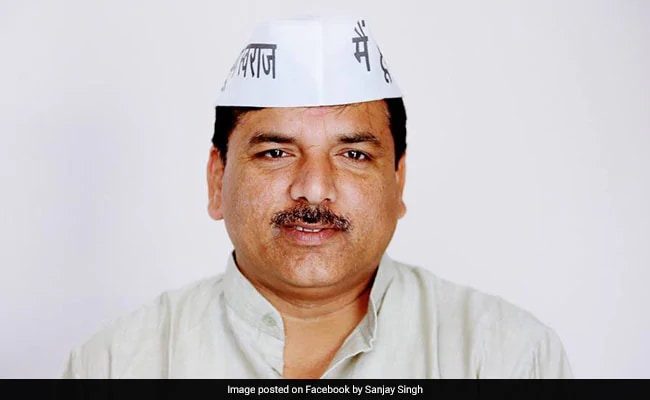 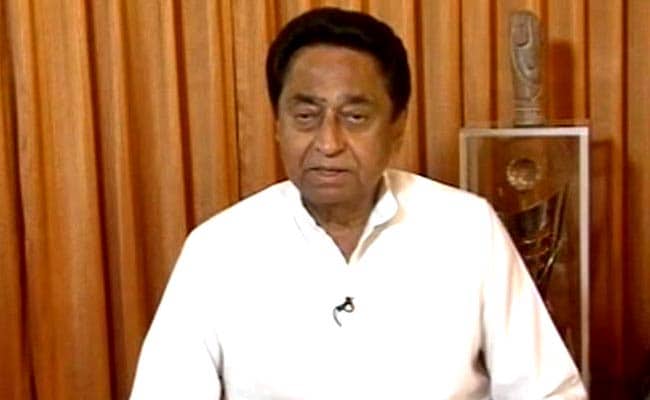 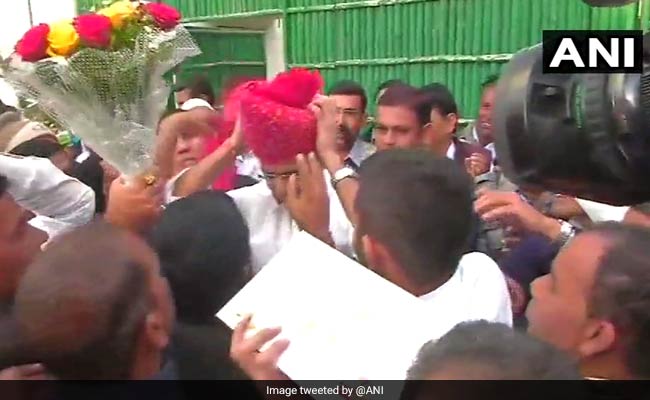 Dec 17, 2018 09:03 (IST)
"Once the cabinet is decided, the Chief Minister will work on its advice. Once it's done, we'll do what's in public interest. The manifesto will be our priority," Rajasthan Chief Minister-designate Ashok Gehlot told news agency ANI. 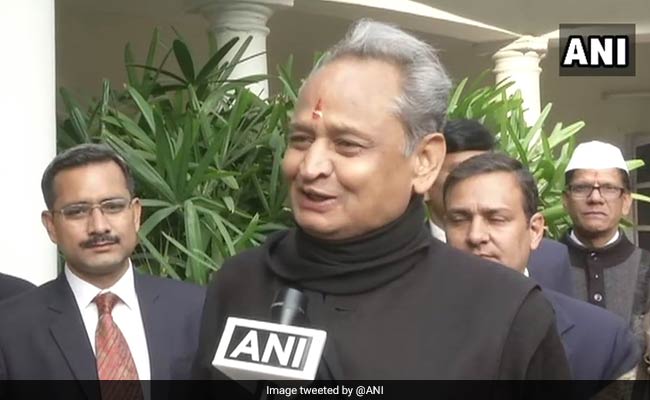