In response to Ashok Gehlot's demands for an Assembly session on Monday, the BJP accused the Chief Minister of theatrics and preventing the Governor from carrying out his constitutional duty

The Ashok Gehlot government in Rajasthan, which has demanded an Assembly session on Monday to prove its majority amid open revolt by sacked Deputy Chief Minister Sachin Pilot, is heading for a "constitutional crisis", the BJP claimed on Saturday evening, minutes after a 12-member delegation met Governor Kalraj Mishra, ostensibly to discuss the coronavirus crisis in the state.

Addressing reporters after the meeting, Rajasthan BJP chief Satish Poonia and other BJP leaders hit out at Chief Minister Ashok Gehlot and the Congress, accusing them of theatrics and preventing the Governor from carrying out his constitutional duty.

"There is a procedure to be followed for calling an Assembly session but the Raj Bhavan was made a theatre for a sit-in. Is that proper? They are violating the Epidemic Act," Mr Poonia, who led the delegation, said, adding, "We have asked the Governor that focus should be on coronavirus. It is out of control in Rajasthan".

"The cabinet has the right to ask for an Assembly session but you have to give reasons for it. The Congress is not giving any reasons for calling the Assembly," Mr Kataria added, repeating his call for CRPF protection for the Governor.

Rajendra Singh Rathore, who is the Deputy Leader of the Opposition in Rajasthan, said: "This government is headed for a constitutional crisis". 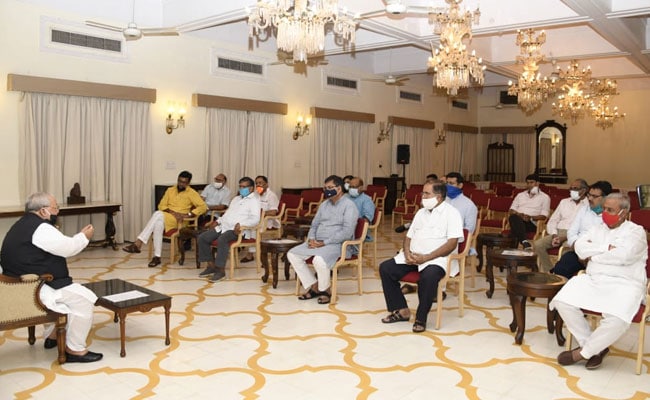 Mr Gehlot has been pressing for an Assembly session to prove his majority since Thursday, amid hearings in the Rajasthan High Court and Supreme Court over petitions by Mr Pilot challenging his disqualification.

On Friday the Chief Minister and MLAs loyal to him protested and shouted slogans outside Mr Mishra's official residence after their request for an Assembly session on Monday was turned down.

Accusing the Governor of delaying the Assembly because he is "under pressure" to halt his test of strength, Mr Gehlot held a late-night cabinet meeting to rework the Assembly session proposal.

This evening, following a second cabinet meeting in as many days, a revised proposal was drawn up and passed. It will be submitted to the Governor.

The Chief Minister is confident of the numbers to win a floor test at this stage; if he does so then his government cannot be tested for the next six months.

The Congress has a narrow lead over the opposition and is only one past the majority mark of 101 in the 200-member Rajasthan assembly.

Team Pilot claims the support of 30 MLAs, but so far, the evidence points to only 19. The BJP has 72. Including smaller parties and independent members, the opposition has 97 at the moment.