Rajasthan Audio Tape: BJP's hue and cry over "unconstitutional' actions come a day after the Congress said audio clips revealed rebel MLAs were plotting with the BJP against the Ashok Gehlot government 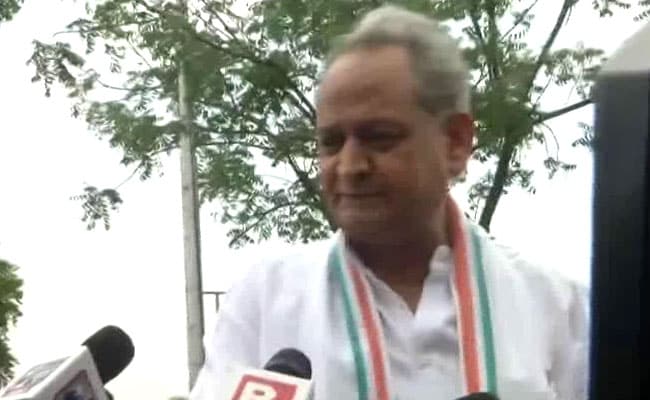 The BJP on Saturday called for a CBI (Central Bureau of Investigation) probe to determine if the Ashok Gehlot-led Congress government in Rajasthan had illegally tapped phones of politicians' in the state.

The party demanded to know if SOP (standard operating procedure) had been followed before taping political leaders' phones or if the Gehlot government, which is on the brink of collapse following open revolt by former Deputy Chief Minister Sachin Pilot, had scrambled to "save themselves when cornered".

Hitting out at "a saga of illegalities and concocted lies", the BJP asked at a press conference today: "These are serious questions that we want to ask the Congress high command and Ashok Gehlot. Was phone taping done? Assuming that you taped phones, was SOP followed?"

The people of Rajasthan want to know if their privacy has been compromised, the party declared.

4. Did the Congress govt in Rajasthan use unconstitutional ways to save themselves when they found themselves cornered?

5. Is phone of any person who is related to politics is being tapped?

The BJP's hue and cry over "unconstitutional' actions come a day after the Congress said audio clips revealed that rebel MLAs from its party were plotting with the BJP against the state government.

Congress spokesperson Randeep Singh Surjewala said one of the voices was that of Union Minister Gajendra Singh Shekhawat and the other was the Congress's Bhanwar Lal Sharma.

NDTV cannot verify the authenticity of these tapes, and both Mr Sharma and Shekhawat have said it is not their voices.

The Congress demanded that allegations of collusion between rebel MLAs and the BJP be investigated by the Rajasthan Police Special Operation Group (SOG), which reports to Chief Minister Gehlot.

The SOG filed two FIRs shortly after Mr Surjewala's press conference, one of which was for sedition. The Congress has called for the arrest of Mr Sharma, who, along with another MLA - Vishwendra Singh - has been suspended from the party.

Meanwhile, the BJP's Laxmikant Bhardwaj has filed a complaint against several Congress leaders, including Mr Surjewala, for associating Mr Shekhawat's name with the clip.

Ashok Gehlot had ordered an investigation during last month's Rajya Sabha election after he accused the BJP of plotting with rebel MLAs to destabilise his government. However, Sachin Pilot rubbished such rumours, pointing out that the Congress had won two of three seats on offer.

The simmering feud between the two exploded shortly after, when Mr Pilot received a summons over the alleged conspiracy. Claims Mr Gehlot also received one were dismissed since the police reports to the Chief Minister, who also holds the Home Minister portfolio.

On Wednesday Mr Gehlot doubled down on those allegations, claiming that his former deputy "was himself doing the deal".

Sources close to Mr Pilot have told NDTV he cannot take Congress offers of rapprochement, conveyed via Priyanka Gandhi Vadra, seriously given  the party has taken harsh action against him.

A section of the Congress believes Mr Pilot went "too far" by taking the party to court, along with 18 rebel MLAs. Team Pilot has challenged disqualification notices which ask them to explain why they defied party orders to attend legislature party meetings.