Madan Lal Saini had emerged as a surprise candidate last summer when he was chosen to head the Rajasthan BJP ahead of the crucial assembly elections in the state. 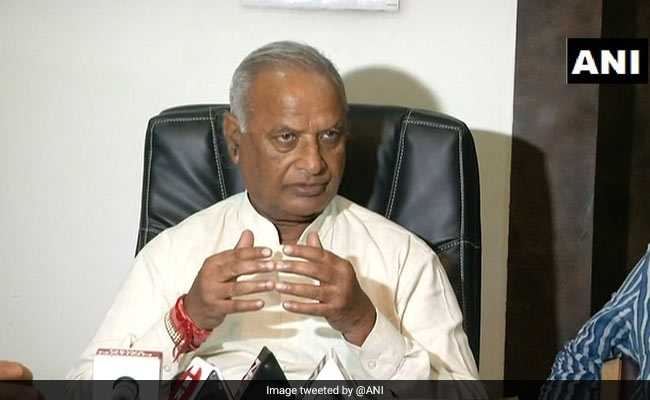 The sudden death of 75-year-old Madan Lal Saini, Rajasthan's BJP president at AIIMS on Monday, where he was undergoing treatment for the past week, has left the BJP state unit of Rajasthan in a shock and has created a power vacuum in the state.

Madan Lal Saini had emerged as a surprise candidate last summer when he was chosen to head the Rajasthan BJP ahead of the crucial assembly elections in the state.

The BJP and its chief Amit Shah's first choice was believed to be Gajendra Singh Shekhawat, but the then chief minister Vasundhara Raje reportedly opposed his name on the grounds that choosing a Rajput would upset their traditional rivals, the Jats, who are nearly 16 per cent of the electorate in Rajasthan.

As a compromise, sources said, the party chose Madan Lal Saini - a modest, low profile party worker who had worked in the labour wing of the BJP and who always travelled to Jaipur from his hometown Sikar, about 110 km, by bus.

Most importantly, sources said, Madan Lal Saini did not represent a threat to Ms Raje's leadership and she quickly agreed to his candidature.

But post the general elections, with the BJP sweeping 25 out of 25 Lok Sabha seats in Rajasthan, political equations in the state have altered dramatically. Ms Raje, who lost the assembly elections in December, is no longer at the forefront of the state's leadership.

All the three ministers in PM Narendra Modi's cabinet - Gajendra Singh Shekhawat, Arjun Ram Meghwal and Kailash Chaudhary - are believed to be from the anti-Raje camp.

The choice of the Lok Sabha speaker, Om Birla, who belongs to the former chief minister's area of influence Hadauti, is known to have maintained a distance from Ms Raje right through her tenure as chief minister.

Who will be the BJP's next president in Rajasthan will be a sure indication of the changing power equations in the state.

A frontrunner is believed to be former minister Rajyavardhan Rathore, who this time has not found a place in the Modi cabinet. The "poster boy" of the BJP in Rajasthan not finding a cabinet berth had led to speculation that he may be used for state leadership in Rajasthan.

Sources, though, say the Rashtriya Swayamsevak Sangh, which is the ideological mentor of the BJP, is prepping for an organization person, who could be either the legislator from Amer, Satish Punia, or the lawmaker from Bhilwara, CP Joshi, who won in Rajasthan with the highest margin of over six lakh votes.

But Ms Raje, who has of late been playing an active and visible role in state politics in Rajasthan, today could be seen handling arrangements for the funeral of Madan Lal Saini from the party headquarters in Rajasthan. Then, in his home town Sikar, she paid a tribute to him saying he represented the ordinary party worker, to whom power and position did not matter.

Ms Raje's colleague Gulab Chand Katariya said Madan Lal Saini was so low profile that it is surprising that he got a chance to be party president and Rajya Sabha lawmaker.