The BJP has promised to create 50 lakh private sector jobs if it wins the Rajasthan assembly elections. The Congress is less concrete in its promise.

In its manifesto for the Rajasthan election, scheduled on Friday, the ruling BJP promises to create 50 lakh private jobs and 1.5 lakh government jobs in five years, three times what it had promised in its 2013 manifesto - 15 lakh jobs.

On the campaign trail, Chief Minister Vasundhara Raje Scindia claimed to have achieved the 2013 target, though in a somewhat modified version. "Employment opportunities" have been created by her government, she said. 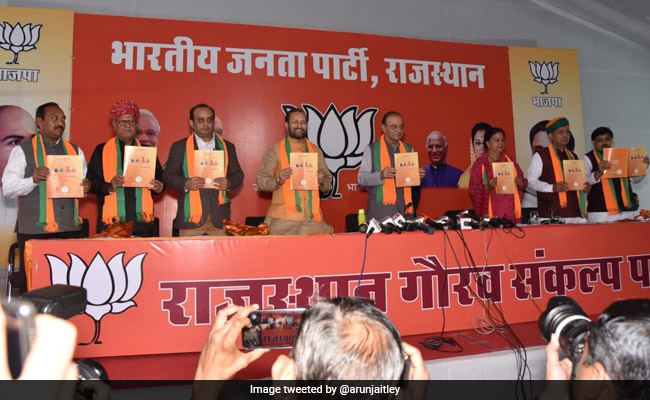 The state government's portal admits that it has "been creating a number of job opportunities, but the increase in jobs has been more than offset by the rapid growth of population." The thrust is now on self-employment, it says.

A report by the Comptroller and Auditor General (CAG) on Rajasthan's Skill Development Corporation says of the 1.8 lakh youth it trained between 2014 and 2017, only 36 per cent or 63,000 got jobs.

In an interview to NDTV, the Chief Minister stood by her numbers. "We managed to do 15 (lakh) plus 50 (lakh) jobs, that is through the MUDRA scheme (the centre's scheme to streamline loans to small businesses). The point is that over a period of time, if the state is doing all-round development, areas for jobs open up," she said.

The BJP manifesto also promised an unemployment allowance of Rs 5,000 per unemployed youth - almost 10 times more than what the state currently pays (between Rs 500-Rs 1.000 per month). 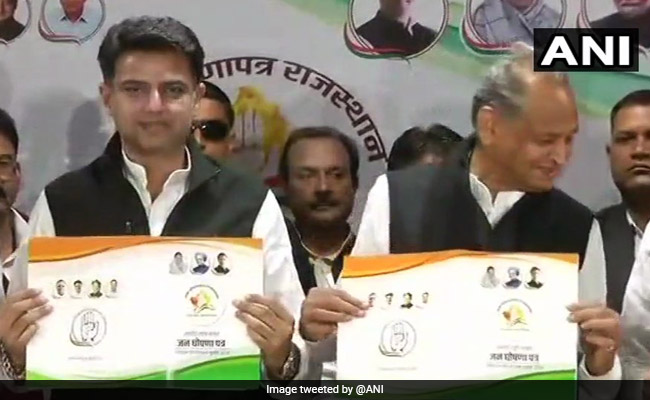 The Congress manifesto for the Rajasthan assembly elections 2018 was released by Sachin Pilot and Ashok Gehlot.

In reality, the allowance covers only four per cent of the estimated 33 lakh unemployed in the state (the estimate is by the national auditor).

The Congress party, while critical of the BJP's track record in job creation, offers no concrete solutions in its manifesto.

The Congress also promises a generous unemployment allowance of Rs 3,500 per head. When asked if the state could afford it, Congress leader Ashok Gehlot told NDTV "it (the allowance) isn't for everyone. Many people do work. Only a few are unable to work, because of some kind of compulsion. They can't even start their own business. They can't get jobs. They can't do any work. So I think it should be seen like that. It isn't that you are distributing it to lakhs of people. That is impossible".