Krishna Poonia, who became the first Indian woman track-and-field athlete to win an individual gold in the 2010 Commonwealth Games 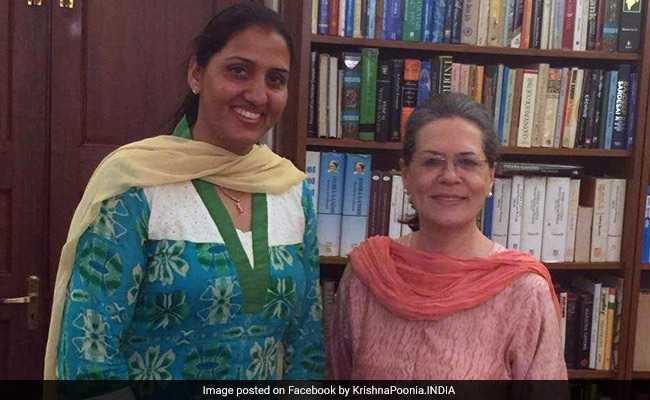 Krishna Poonia finished third behind BSP, BJP candidates on the Sadulpur seat in the previous election

Having experienced many top of the podium finishes as a champion discus thrower, Congress candidate from Sadulpur, Krishna Poonia, feels that winning the assembly election will be the same as a gold medal triumph on the athletics field.

Ms Poonia, who became the first Indian woman track-and-field athlete to win an individual gold in the 2010 Commonwealth Games, has put behind the disappointment of loss in the last assembly polls in Rajasthan and says sports has always taught her to be a fighter with a 'never say die' attitude.

In the last assembly election, she finished third behind the Bahujan Samaj Party (BSP) and the Bharatiya Janata Party (BJP) candidates on the Sadulpur seat. She is up against tough opponents once again -- former BJP Member of Parliament or MP Ram Singh Kaswan and the sitting BSP Member of Legislative Assembly or MLA Manoj Kumar Nyangali.

However, the athlete, who is from Haryana and is married to Virender Poonia, who belongs to the Rajasthan constituency of Sadulpur, says she is confident that her 'sasural' (place of in-laws) will not disappoint her.

In an interview to PTI, Ms Poonia said she scripted history in sports and this time the people will back her and ensure the "number one spot" for her in the polls as well.

Asked if being a sportsperson has helped her in her political career, she said, "There are a lot of negative thoughts in politics, but I always stay positive."

"When I lost election last time, then I did not think that I am a celebrity and I should go back to Jaipur... In the last five years, I have put in a lot of hard work as I had done in sports," she said.

Ms Poonia said she had been reaching out to each and every section of the society after her poll defeat which has made her stronger.

Asked if her 'never say die' attitude comes from being a sportsperson, she said, "I can definitely say that. I'll give you an example, you would have seen that when athletes lose, they wake up the next morning and try harder for winning the next time."

Sports not only teaches fighting qualities but also is a way of life, said Ms Poonia, who also has two Asian games bronze and a national record in discus throw to her credit.

Ms Poonia's public meetings show that her connect with the people has certainly grown as women in large numbers cheer for her when she states that woman power will triumph.

At a rally in Gagarwas on Sunday, several village elders were seen blessing Ms Poonia and the youngsters were heard chanting slogans like "Krishna aandhi hai, doosri Indira Gandhi hai (Krishna is like a storm, a second Indira Gandhi)".

Talking to PTI after the rally, Ms Poonia said she chose to take up politics as underdevelopment in the area irks her.

Asked if winning on the athletics field was more satisfying for her or will an election triumph be more important, the 36-year-old said sports has given her an identity and therefore will always be close to her heart.

"I have chosen politics to serve. The second part of my life is politics in which I want to move forward and serve. Sports was my past and politics is my 'karambhoomi'," she said.

On whether winning in the elections is at par with getting a gold medal in athletics, she says: "Definitely, because I had chosen a 'hard' constituency. When Ashok Gehlot and others sat down (in 2013) they had said that this seat was weak. But I had chosen this assembly seat because I come from here and circumstances here are such that there is a need to work for youngsters."

Ms Poonia said that when in 2013 she decided to take the political plunge, Congress was the natural choice for her as her family has traditionally supported the party.

"The main reason was that when you look at real issues of farmers, small traders, when I see these categories, it is the Congress that works for them. In the last five years, all those who raised questions over my decision (of joining the Congress) now say that I had taken the right decision," she said.

She said sometime the simple and straightforward approach of a sportsperson gives her trouble in the political arena, but she still refrains from making any false and unrealistic promises.

Asked who her inspiration in politics was, Ms Poonia said she has learnt a lot from the life of "iron lady" Indira Gandhi and former Prime Minister Rajiv Gandhi.

She praises both state Congress chief Sachin Pilot and senior party leader Ashok Gehlot, saying she credits both of them and the Congress team for the party's turnaround in the state.

On what would she do to promote sports infrastructure, Ms Poonia said she will strive for building an international-level athletics stadium in her constituency, among other things.

Ms Poonia has taken part in three Olympics (2004, 2008 and 2012) and she is one of the few Indian track and field athletes to have qualified in the final round of any event in the Olympics where she finished sixth in 2012 London Games.