Rajasthan Assembly Election Result 2018: Dressed in a red bandhani sari, Vasundhara Raje was seen entering the sanctum sanctorum and offering prayers to the deity with 18 hands 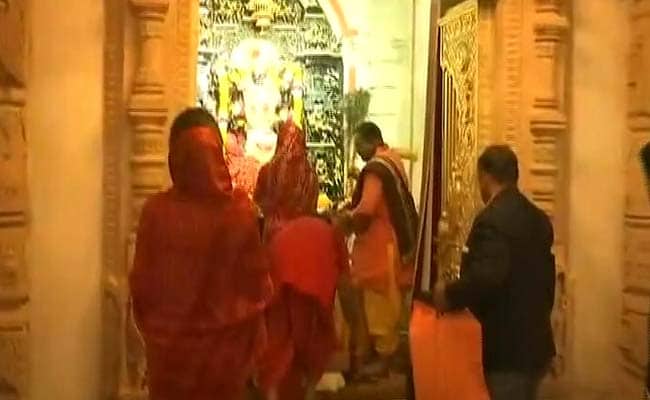 Vasundhara Raje contested from Jhalrapatan, a town in Jhalawar that has thrice voted for her since 2003.

Just before counting of votes began in Rajasthan, Chief Minister Vasundhara Raje visited the Maa Tripura Sundri Temple, about 20 km from Banswara. Dressed in a red bandhani sari, she was seen entering the sanctum sanctorum and offering prayers to the deity with 18 hands. The temple, which is home to the beautiful idol made of black stone, is believed to be about 700-year-old.

The chief minister is expected to pray there till the announcement of results, an official said.

In Rajasthan, which has 200 seats, early leads show the Congress ahead in the race.

In the previous assembly polls in 2013, her party, the BJP, had got a bigger mandate than in 2003 when it came to power and Ms Raje became the first woman chief minister of Rajasthan. But the 65-year-old is now facing her toughest political challenge yet -- reversing the trend that no ruling party has been voted back to power in Rajasthan since in 1993.

Exit polls have also suggested that Ms Raje won't return for a third term as the chief minister amid the huge anti-incumbency wave. But her supporters are confident of her win.

Manvendra Singh, former BJP leader and the son of former BJP leader Jaswant Singh, was sent by the Congress -- the party that he joined after exiting the BJP -- to fight it out in Jhalrapatan, a town in Jhalawar district that has thrice voted for Vasundhara Raje since 2003.

The polls in five states -- Madhya Pradesh, Rajasthan, Chhattisgarh, Telangana and Mizoram -- are being considered a semi-final before the 2019 elections. Winning Rajasthan is crucial for the Congress, and Ms Raje's defeat would mean a huge blow for the BJP, just months ahead of the Lok Sabha elections.

"She's a woman who we all respect as an individual," said her rival and Congress leader Sachin Pilot. "But her term in office, her governance, arrogance, her sense of cutting off people..." Mr Pilot said, adding that she got a huge mandate in 2013, but she "squandered" it.