Mumbai rains: A secondary runway has been made operational at the city's Chhatrapati Shivaji International Airport but flights are likely to be delayed, warn airlines

Rains in Mumbai: 54 flights diverted to nearby airports like Ahmedabad and Goa

Mumbai airport authorities have said it could take up to 48 hours to re-open the main runway after it was closed late last night following a SpiceJet flight that overshot while landing amid heavy rain. A 150-metre-ramp is being prepared to help move the plane, a Boeing 737-800, which is still stuck at the end of the runway.

"Spicejet SG 6237 Jaipur-Mumbai flight overshoots runway while landing at Mumbai Airport. All passengers are safe, no injuries reported," a spokesperson for the airline said in a statement last night. The plane had 167 passengers and crew on board.

Domestic airlines have posted messages on social media warning people of cancellation and delays. Air Vistara has confirmed the cancellation of ten flights in and out of Mumbai, including flights to Delhi, Kolkata, Hyderabad, Bengaluru and Chennai. 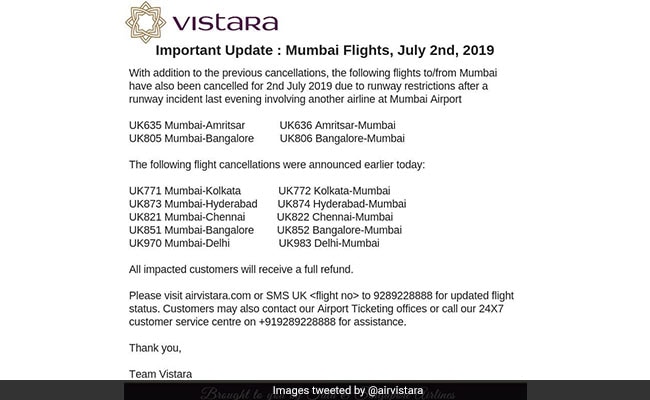 SpiceJet and Indigo also tweeted, warning passengers that the rains could affect departures and arrivals

SpiceJet and Indigo have asked passengers to check for delays and cancellations of flights before leaving for the airport.

Among the planes diverted were a Korean Air flight from Seoul to Mumbai that was sent to Ahmedabad. A Lufthansa flight from Frankfurt and an Air India flight from Bangkok also had to be diverted, sources were quoted as saying in a report by news agency PTI.

Mumbai has received 540 millimetres of rain since Sunday night - the highest over a two-day period in the last decade - Mumbai Municipal Commissioner Praveen Pardeshi told NDTV. "...In June, average rainfall was 515 mm. We have got 540 mm in just two days. This is the highest in a decade," he said.

The city is set for more downpours in the next 24 to 48 hours. The Regional Meteorological Centre has warned of heavy to very heavy rainfall in Mumbai city and its suburbs.

Private weather agency Skymet said Mumbai is at "serious risk of flooding" between July 3 and 5, warning that "close to 200 mm or more rain per day is likely during this period".

The Western Express Highway which leads to the airport was flooded after continuous rain in Mumbai, making it extremely difficult for people running to catch their flights reach the airport on time.

The Maharashtra government has declared a public holiday today in Mumbai as a precautionary measure following the incessant rain.

Meanwhile, rail services have also been affected by the rain.

Central Railway tweeted that one train had been cancelled and seven were stopped early. Western Railway has said there is no disruption but all trains are running with delays due to low visibility in certain sections.

More than 20 people were killed in two separate cases of wall collapse in Malad in Mumbai and Thane's Kalyan.

Attorney General Nod To Case Against YouTuber For Remarks Against Top Court, Judges