Earlier this week -- a day after it downgraded ties over India's decision to end special status to Jammu and Kashmir -- Pakistan suspended Samjhauta Express service. 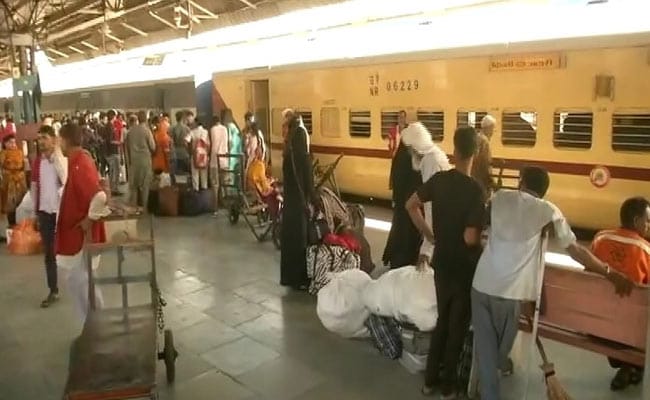 Earlier this year, the Samjhauta Express service was suspended after the Pulwama terror attack.

The service of Samjhauta Express - which runs from Attari to Pakistan's Lahore - was stopped on the Indian side today, two days after Pakistan suspended it citing the government's Kashmir decision. The train ran on Sundays from Delhi to Attari and back. Pakistan used to run the train between Lahore and Attari. Passengers used to change trains at the Attari station.

The Indian Railways, in a tweet, said, "In consequent to Pakistan's decision to cancel samjhauta exp 14607/14608 running between Lahore and Atari .......the link exp train number 14001/14002 running between Delhi and Atari also stands cancelled (sic)."

Earlier this week -- a day after it downgraded ties over New Delhi's decision to end special status to Jammu and Kashmir -- Pakistan suspended the Samjhauta Express service. It also banned Indian movies, and stopped the running of Delhi-Lahore-Delhi 'Dosti' (friendship) bus service and the other cross-border train, Thar Express.

On Wednesday, Pakistan expelled the Indian envoy and announced a five-point plan that included the downgrade of ties with India, suspension of bilateral trade and flagging the government's move.

India has asked Pakistan to review its decision to downgrade diplomatic and trade ties, saying its decision on Kashmir was an internal affair aimed at the state's development.

The foreign ministry has also emphasised that the withdrawal of special status to Jammu and Kashmir and its bifurcation were "entirely an internal affair."

On Wednesday, the Samjhauta Express stopped at the Wagah border minutes after Islamabad's announcement. The Pakistani crew refused to go further and demanded that the Indian authorities take charge of the passengers. After nearly three hours, an Indian crew took over the train and drove it to Attari.

The train, with 110 passengers on board, was late by over four and a half hours.

Earlier this year, the Samjhauta Express service was suspended after the terror attack in Jammu and Kashmir's Pulwama and the subsequent Indian Air Force strike on a terror camp in Pakistan's Balakot.