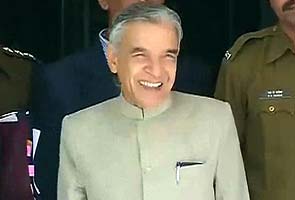 New Delhi: The judge handling the investigation into the railway scam that cost Pawan Bansal his job as Railways Minister in May has said that she may ask for the former minister's role to be examined during the trial.

"The high and mighty should not escape the law," the judge said in a written order, accessed exclusively by NDTV, that seems highly critical of the CBI's decision to clear the minister of any role in the scandal. The agency however says the judge has not made any negative remarks about its inquiry.

"The culture of sifarish (lobbying for recommendations) and right contacts will not do," Judge Swarna Kanta Sharma said.

The scandal revolves around Mr Bansal's nephew, Vijay Singla, promising a coveted position on the powerful Railways Board to a man named Mahesh Kumar in exchange for kickback. Mr Singla was caught accepting an alleged first installment 90 lakhs.

The CBI has said there is no evidence to prove Mr Bansal was aware of the conspiracy, and has enlisted him as a witness for the prosecution, provoking the opposition to contend that the investigation against him has no teeth.

The judge handling the case has said in her order, "If the CBI has chosen to make Mr Bansal a witness, then at this juncture, there being no evidence against him, the court cannot pass any order or question him, except during the trial."

The meeting at which the cash-for-office deal was finalized was held at Mr Bansal's official residence in April, but the former minister has said he was not in town that weekend.

In a 12-page statement to the CBI, the politician has denied all knowledge of his nephew's activities, but has agreed that Mr Singla's voice can be heard in taped phone conversations in which the deal was discussed.

The CBI recorded hundreds of calls based on a tip-off about the conspiracy before it arrested the politician's nephew.

Mr Bansal reiterated, "The CBI interrogated me for seven hours rigorously. If it found there is nothing against me, how can we just ignore that?"

Promoted
Listen to the latest songs, only on JioSaavn.com
In a statement on Friday, the CBI said,  "The Hon'ble judge has not passed any adverse remarks against CBI probe. The judge has merely questioned why two persons (associates of Manjunath ) were not arrested earlier by the CBI."