Congratulating Rahul Gandhi on his elevation, she said personal attacks on her son have made him fearless and voiced confidence that the young leadership will infuse new vigour in the party. 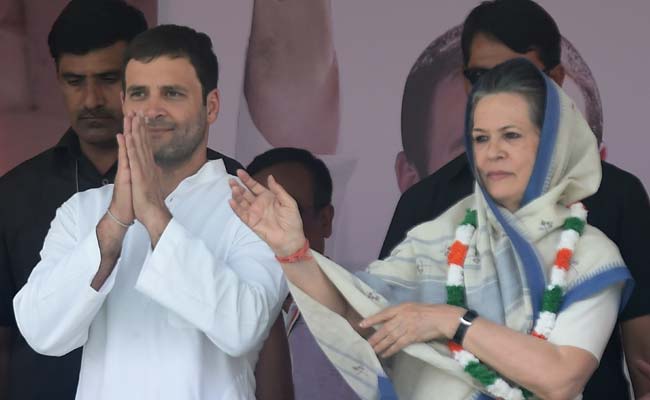 New Delhi: Handing over the charge of Congress president to her son Rahul Gandhi, Sonia Gandhi today said the party should set its house in order and be ready for any sacrifice to keep the country united.

Congratulating Rahul Gandhi on his elevation, she said personal attacks on her son have made him fearless and voiced confidence that the young leadership will infuse new vigour in the party.

"I am sure he will lead the party with courage and dedication," 71-year-old Sonia Gandhi said addressing an event in which Rahul Gandhi was handed over the certificate of election as Congress president.

Sonia Gandhi, who headed the 132-year-old Congress for the last 19 years, also thanked party leaders and workers for the support she received during her tenure as its chief.

Mrs Gandhi said that the country was facing "unprecedented challenges", but stressed that the party was not going to be scared.

"Congress should introspect and move forward and stand by its values.... It is a moral battle, we have to set our house in order and be ready for the fight and to make any sacrifice," she said.

Striking a personal note, Sonia Gandhi said she was proud of her son's endurance and determination.

"Rahul is my son and I don't feel it is appropriate that I praise him but I will definitely say that since childhood he had faced the agony inflicted by violence."

"In his political life, he faced vicious personal attacks which have made him more fearless. I am proud of his endurance and determination. I am fully confident that he will lead the party with courage and dedication," Sonia Gandhi said.

During the speech, she also talked about the time when she was reluctant to join politics following the assassination of her mother-in-law Indira Gandhi and husband Rajiv Gandhi.

Sonia Gandhi had to briefly stop her speech due to disturbance from bursting of fire crackers outside the Congress party headquarters by party workers to celebrate Rahul Gandhi's ascension.