Rahul Gandhi accused the government of targeting him to steer the focus away from the massive protests in the northeast, especially Assam, over the Citizenship law. Mr Gandhi also said Raghuram Rajan had given him a bleak picture of India's image abroad. 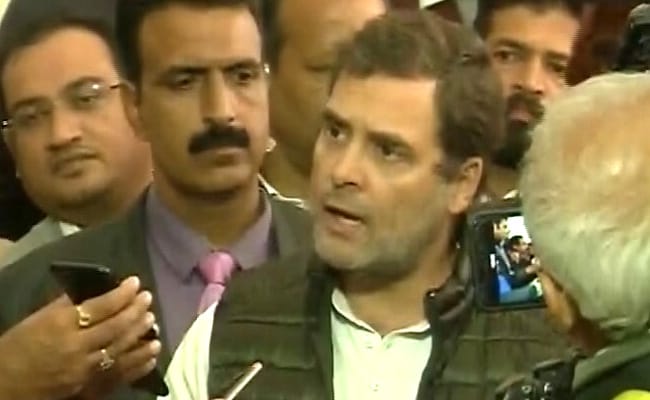 Rahul Gandhi, pilloried by the BJP over his "Rape in India" comment at an election rally, countered today that Prime Minister Narendra Modi should apologise. "I will never apologise to these people, thank you," declared the Congress leader, alleging that he was not allowed to respond to the BJP attacks in parliament. Mr Gandhi, 49, accused the government of targeting him to steer the focus away from the massive protests in the northeast, especially Assam, over the Citizenship law.

It is PM Modi who should apologise "for burning the northeast, for destroying India's economy and for his speech calling Delhi the rape capital of India," said the Congress leader to reporters and in a tweet.

1. For burning the North East.

3. For this speech, a clip of which I'm attaching. pic.twitter.com/KgPU8dpmrE

"I have a clip on my phone where you can hear Modi calling Delhi 'rape capital' I am going to post that on Twitter, everyone can see it. The main agenda is that Modi and Amit Shah have burned North East. They are saying this about me to divert attention," he said outside parliament.

The trigger for the BJP protests was a comment that Rahul Gandhi made at an election rally in Jharkhand yesterday: "Narendra Modi had said 'Make in India' but nowadays wherever you look, it is 'Rape in India'."

He said: "Let me clarify. I said Narendra Modi said there will be Make In India, we thought newspapers would have headline with Make In India, but when you open the papers, you only see 'Rape in India' everywhere."

States ruled by the BJP were worst affected, he said, referring to Unnao in Uttar Pradesh, where a now-expelled BJP MLA, Kuldeep Sengar, is accused of raping a teenager and then trying to kill her in a car accident.

Rahul Gandhi also spoke of a conversation with Raghuram Rajan, claiming that the economist and former RBI chief had given him a bleak picture of India's image abroad.