PM Modi's "Thinking Is Anti-Dalit, He Wants To Crush Them": Rahul Gandhi

Dalits are being openly beaten and crushed in states where the BJP is in power, Rahul Gandhi said in a scathing attack against the Prime Minister at a protest organised by Dalit organisations over the alleged dilution of the SC/ST (Prevention of Atrocities) Act, 1989. 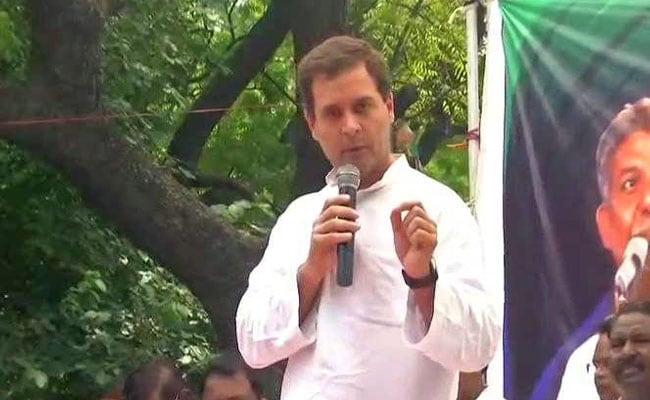 Congress president Rahul Gandhi today accused Prime Minister Narendra Modi of having an "anti-Dalit" mindset and asserted that a government for the welfare of the weaker sections will be formed in 2019 following the BJP's defeat.

Dalits are being openly beaten and crushed in states where the BJP is in power, Mr Gandhi said in a scathing attack against the Prime Minister at a protest organised by Dalit organisations over the alleged dilution of the SC/ST (Prevention of Atrocities) Act, 1989.

"Everything starts from intent. If he (Modi) would have had place for Dalits in his heart, then policies would have been framed differently. In Gujarat, he brought out a book of his speeches in which he wrote that Dalits get spiritual satisfaction out of cleaning. These lines throw light on his thinking and ideology," Mr Gandhi said at the protest held in New Delhi's Jantar Mantar.

He alleged that the Prime Minister, the BJP and the RSS don't want Dalits to have a share in education and in progress of the nation.

Attacking the Prime Minister, Mr Gandhi said, "His thinking is anti-Dalit. All Dalits and people from the weaker sections know that the prime minister has no place for Dalits in his heart and mind and wants to crush Dalits. That is why we are standing against him."

He added that the BJP will be defeated in 2019 and a government for Dalits, weaker sections, tribals, farmers formed.

The atrocities act was brought by the Congress and the party will protect it together with the people, Mr Gandhi added.

"The atrocities act was given to India by the Congress party and former prime minister Rajiv Gandhi, it was attacked and the judge who attacked it was promoted and rewarded by the Modi government," he said, referring to the appointment of AK Goel as head of the National Green Tribunal.

"Wherever there is a BJP government, in those states Dalits are openly beaten and crushed. We don't want an India like this. We want an India in which there should be place for everybody, whether Dalits, poor, tribals or minorities...everybody should progress. We will fight for such an India," he added.

Declaring that there will be no stepping back, he said Dalits are crushed whenever they try to progress and cited the case of Rohith Vemula, the PhD scholar at Hyderabad university who committed suicide in the campus on January 17, 2016.

Several Dalit groups have voiced their protest against the Supreme Court ruling of March 20, saying the law against atrocities faced by the weakest sections of the society was "diluted" by putting additional safeguards against arrest of the accused.

A bill to overturn the Supreme Court order was unanimously passed by the Lok Sabha on Monday.

Some Dalit groups are still protesting, demanding further protection for the act by putting it in the Ninth Schedule of the Constitution, release of leaders who were arrested under criminal charges after the Bharat Bandh held in April and the arrest of all those involved in atrocities against Dalits.