Rahul Gandhi, 48, was surrounded by Congress veterans Ghulam Nabi Azad, Ahmed Patel and Abhishek Manu Singhvi, all of whom chipped in with inputs. 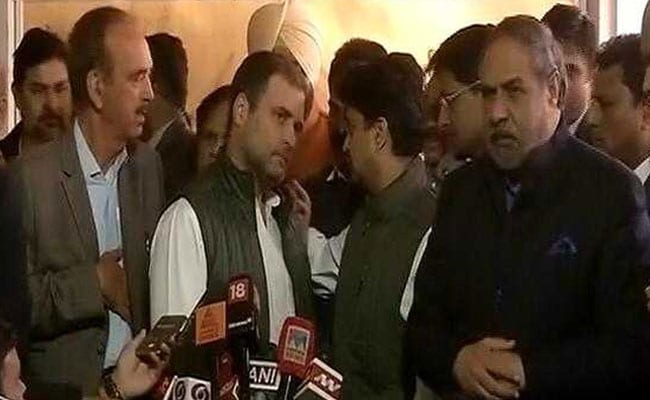 Congress chief Rahul Gandhi can be seen being advised by Jyotiraditya Scindia.

Rahul Gandhi's press conference at parliament on Tuesday, declaring that the opposition "would not allow Prime Minister Narendra Modi to sleep" until farm loans are waived, has drawn attention on social media for what the Congress would call the wrong reason. Before his impromptu statement to the media, the Congress president is seen nodding as colleague Jyotiraditya Scindia leans in and advises him on what to say.

"You need to say what Modi could not do, I have done," Jyotiraditya Scindia audibly says as Rahul Gandhi prepares to speak.

"...and don't ask for centre's assistance..." adds the 47-year-old Congress lawmaker who enjoys his party chief's immense trust even though he lost the race for Madhya Pradesh chief minister.

Rahul Gandhi, 48, was surrounded by Congress veterans Ghulam Nabi Azad, Ahmed Patel and Abhishek Manu Singhvi, all of whom chipped in with inputs.

He went on to tell reporters about the new Congress governments in Madhya Pradesh and Chhattisgarh announcing farm loan waivers within hours of the oath ceremonies.

Union Minister Smriti Irani seized on the video that was highlighted by many TV channels and also on social media. "These days, does one need tuition even to dream," she wondered in a caustic tweet.

"Rahul Gandhi takes tuition to dream and the current video shows that he doesn't trust his own words but he relies on others who teach him what to speak. It is a warning for the people of this country to know that he is not eligible for any electoral post," Smriti Irani was quoted as telling ANI news agency.

Another video of Rahul Gandhi yesterday was also shared widely on social media.

In that, he is asked by reporters to comment on the loan waivers announced by the states the Congress won last week.