Rahul Gandhi cited a report that said shares worth $45 billion have been sold by international investors since June because of eroding confidence in the economy. 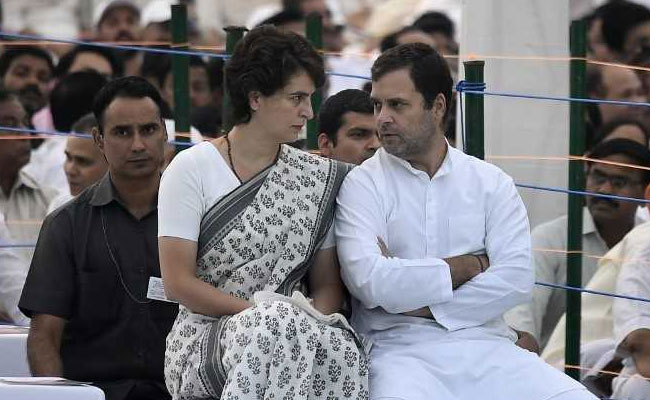 Congress leaders Rahul Gandhi and Priyanka Gandhi Vadra paired up on Wednesday to take aim at Prime Minister Narendra Modi's mega event in the United States that will be attended by US President Donald Trump, saying all the spectacle in the world was not enough to cover up the economic crisis at home.

Titled "Howdy, Modi", the event is set to be PM Modi's big address to the Indian community in Texas on Sunday during his visit to the United States.

Playing on the name of the event, Rahul Gandhi took a dig at the Prime Minister by raising the issue of the state of the economy and said it did not seem to be in good shape.

Ain't too good it seems. #HowdyEconomyhttps://t.co/p2NTW3fLZo

He also cited a report that said shares worth $45 billion have been sold by international investors since June because of eroding confidence in the economy.

His sister Priyanka Gandhi Vadra also attacked the government, saying the confidence of investors is "shaken" but the Modi government is refusing to acknowledge the truth.

"India's economy cannot be fixed with razzle-dazzle, saying '5 trillion, 5 trillion' every day or by doing media and headline management. Investors do not come by sponsoring events abroad," Priyanka Gandhi Vadra tweeted in Hindi, attaching a link to the same report.

While the government has put up a brave face amid the flagging financial indicators, the Congress has kept up its offensive against the Modi government over the slowdown.

The Bloomberg report cited by the Congress leaders said, "The country's economic growth has decelerated for five straight quarters to the weakest level since early 2013, one year before Narendra Modi became prime minister. And the 5 per cent headline number for the second quarter may actually understate how painful the slowdown has become. Car sales are sinking at the fastest pace on record, capital investment has plunged, the unemployment rate has surged to a 45-year-high and the nation's banking system is hamstrung by the world's worst bad-loan ratio. Monday's oil-price spike adds yet another headwind for a country that imports most of its crude."