Read inOther Languages
This Article is From May 30, 2020

The first year of the Modi government's second term has been full of accomplishments and unimaginable challenges with the Prime Minister leading from the front and taking "bold and timely" decisions to combat COVID-19 crisis, Mr Nadda said. 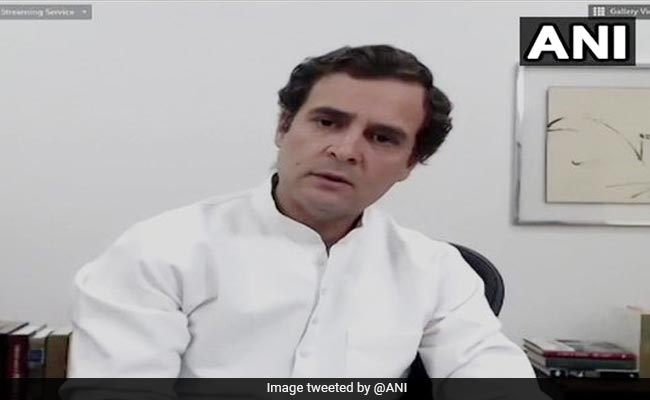 Slamming Rahul Gandhi for his criticism of the Modi government's handling of the COVID-19 situation, BJP president JP Nadda said today that the Congress leader's understanding of these issues is limited and that his statements are not aimed at addressing the crisis but are all about politics.

Addressing a press conference on the first anniversary of the Prime Minister Narendra Modi-led government's second term, Mr Nadda said the last one year will be known for many bold decisions and its timely actions to deal with coronavirus have ensured that the situation remains in control in India when many big and powerful countries have found themselves "helpless".

The first year of the Modi government's second term has been full of accomplishments and unimaginable challenges with the Prime Minister leading from the front and taking "bold and timely" decisions to combat COVID-19 crisis, Mr Nadda said.

Asked about Rahul Gandhi's remark that the nation-wide lockdown has failed in its purpose, Mr Nadda said, "Rahul Gandhi doesn't understand these issues deeply. His understanding and study of issues is limited. That is why he makes confusing remarks by sometimes questioning the lockdown and sometimes demanding why it was not being extended."

His statements are for political ends and all about politics, and they have got nothing to do with addressing coronavirus issues, the BJP chief said.

He blamed the Congress for politicising the issue, and claimed that the BJP worked towards serving people during the crisis.

Answering a question, Mr Nadda asserted the government's pitch for a self-reliant India is about encouraging Indian industrialists, and is not about going back or the subject of license quota, a reference to protectionist and control economy India practiced before the 1991 reforms.

"Our ethos will be progressive, not regressive," he said.

He noted that the coronavirus testing in India has reached 1.6 lakh per day from 10,000 earlier, and the country is manufacturing over 4.5 lakh personal protective equipment (PPE) kits daily as well.

The BJP chief cited the Citizenship (Amendment) Act, annulment of Article 370, strengthening of anti-terror laws and those against crimes against children and bank mergers among the government's key successes.

He said Union Home Minister Amit Shah played a key role in many of these decisions.

Mr Nadda said the Congress worked for long to delay a decision on the Ayodhya case and added that a grand Ram temple would now be built following a Supreme Court verdict.

PM Modi since taking over as Prime Minister in 2014 changed the "political culture" of governance and infused it with momentum, he said.

The coronavirus situation will have an impact on political campaigns during elections, he said, adding that his party has been using technological tools to organise its activities.

The first major election in the coming months is the Bihar Assembly polls, slated for October-November.

He announced that the party will hold over 2,000 digital rallies across the country to mark the first anniversary of 'Modi govt 2.0'.