The Congress has been demanding that the pricing details of the fighter jets be made public, but the government continues to say "it can't" citing a secrecy clause 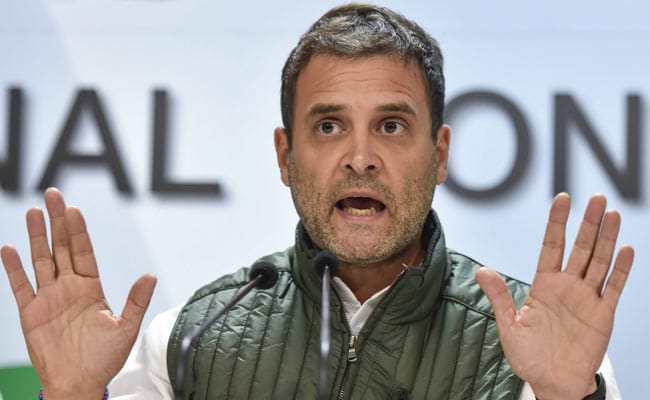 Congress chief Rahul Gandhi has already slammed the Comptroller and Auditor General (CAG) report on the Rafale deal, which is yet to be tabled in the parliament, and dubbed it as "Chowkidar Auditor General" report. Sources say that the report doesn't mention the prices of the jets as the government called it classified information.

The Congress has been demanding that the pricing details of the fighter jets be made public, but the government continues to say "it can't" citing a secrecy clause.

Sources say the auditor was "explicitly told by the Defence Ministry that pricing details can't be shared because of national security". There was a "lot of government pressure," sources told NDTV. The auditor agreed to keep pricing out of his report and carry out an audit on percentage terms.

The fact that Comptroller and Auditor General Rajiv Mehrishi was the Finance Secretary when the Rafale deal was inked had also provoked Congress allegations of conflict of interest. The party accused the CAG of being "complicit in the irregularities" in the Rafale deal and alleged that "the bungling was happening at the highest level with his direct or indirect complicity and consent".

Senior Congress leader Kapil Sibal alleged that Mr Mehrishi would definitely try to save the BJP-led NDA government in a bid to save himself. How can the CAG investigate and act against himself, the Congress leader wondered.

Mr Gandhi has also alleged that PM Modi "acted as Anil Ambani's middleman" and cited an email that he said revealed the industrialist had visited Paris and met with the French defence minister 10 days before the PM went there and announced purchase of 36 jets. The Congress president alleged that Anil Ambani was aware of the deal when even "the Defence Minister and the Foreign Secretary didn't know".

"PM has compromised national security, he has done what spies do," Rahul Gandhi said.

Anil Ambani's Reliance Defence said in a statement that "facts are being deliberately twisted and reality being ignored" and that the visit had nothing to do with Rafale.

Law Minister Ravi Shankar Prasad, in a stinging rebuttal, said: "How Rahul Gandhi got the email of a private company is in a cloud.

Regardless of the shameful manner in which Rahul Gandhi is acting as a lobbyist for companies, the country will not bend. The country needs fighter planes and good defence equipment."

The Supreme Court in December refused to investigate the deal and rejected petitions that alleged corruption, including the choice of Anil Ambani's firm as domestic partner. But the opposition says the government concealed vital information.