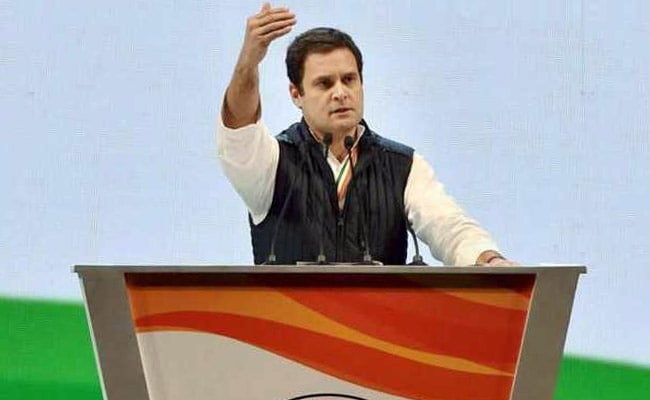 Rahul Gandhi attacked PM Modi over allegations of data sharing from his app without users' consent.

New Delhi: The Congress and the BJP today again locked horns on the prickly issue of data sharing with Rahul Gandhi dubbing Prime Minister Narendra Modi the "Big Boss who likes to spy on Indians" and the ruling party accusing the opposition party of "theft".

Taking to Twitter after allegations surfaced that data from the prime minister's official app was being shared without the consent of users, the Congress president said the NaMo app secretly recorded audio, video, contacts and even tracked location via GPS.

"Modi's NaMo App secretly records audio, video, contacts of your friends and family and even tracks your location via GPS. He's the Big Boss who likes to spy on Indians.

"Now he wants data on our children. 13 lakh NCC cadets are being forced to download the APP," Mr Gandhi said on Twitter using the hashtag "DeleteNaMoApp".

The BJP, however, rubbished the charge and alleged that the Congress chief was speaking a "lie".

Hitting out at Mr Gandhi, BJP's IT cell in-charge Amit Malviya said it was his party's app that was sharing user data with his friends in Singapore.

"Hi! My name is Rahul Gandhi. I am the President of India's oldest political party. When you sign up for our official App, I give all your data to my friends in Singapore," Mr Malviya said, mimicking Mr Gandhi's tweet yesterday.

"Full marks to Congress for stating upfront that they'll give your data to **practically anyone** - undisclosed vendors, unknown volunteers, even 'groups with similar causes'. In theft of all forms, Congress has never been discreet!" Mr Malviya tweeted.

Mr Malviya went on to allege that the Congress, inspired by its leader Sonia Gandhi's "all power no accountability", will take all your data, even share it worldwide with organisations like Cambridge Analytica but will not take responsibility of it.

The party had yesterday said that contrary to Rahul Gandhi's lies, data was being used for only analytics using third party services, similar to Google Analytics.

"Analytics on the user data is done for offering users the most contextual content," it said.

The party claimed the Narendra Modi app is unique and gives access to users in guest mode' without even any permission or data.

"The permissions required are all contextual and cause-specific," the BJP stated on its Twitter handle.

The Congress chief had yesterday attacked PM Modi over allegations of data sharing from his official app without users' consent. Mr Gandhi also accused the media of "burying" the story.

His attack on the prime minister was based on a media report in which a French vigilante hacker has purportedly alleged that data was stolen from his official NaMo app without the consent of the users.

"Hi! My name is Narendra Modi. I am India's Prime Minister. When you sign up for my official App, I give all your data to my friends in American companies, Mr Gandhi said on Twitter.

Promoted
Listen to the latest songs, only on JioSaavn.com
The Congress and the BJP have indulged in a slinging match over data theft and the use of services of Cambridge Analytica, accused of harvesting data from Facebook.