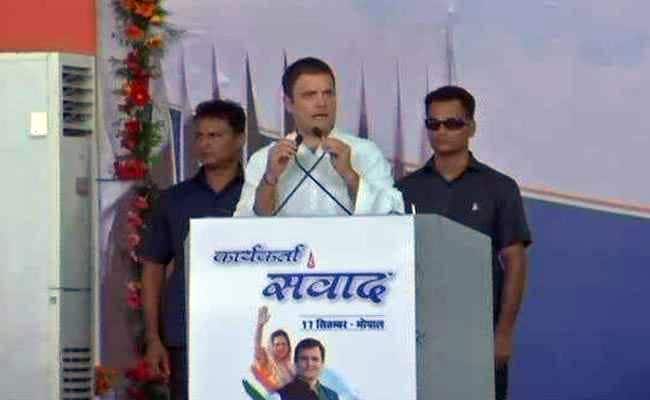 Rahul Gandhi questioned why the loans of farmers, who borrowed Rs 5000, could not be waived

Congress President Rahul Gandhi on Monday termed the demonetisation as the "biggest scam" of the Modi government to convert black money into white. He was speaking at a 15-km roadshow in poll-bound Madhya Pradesh,

Travelling in a bus, the 48-year-old leader criss-crossed several areas of Bhopal, passing through the roads which were decorated and had party banners like the ones describing

Mr Gandhi as a 'Shiv bhakt' (a devotee of Lord Shiva). The roadshow was the virtual launch of the Congress campaign for the assembly polls slated later this year, in which his party has the tough task of dislodging the BJP which has been ruling the state for the last 15 years.

Thousands of Congress workers and local residents flanked the roads and jostled to catch a glimpse of Gandhi, who was accompanied by senior party leaders, including state Congress president Kamal Nath and state party's campaign panel chairman Jyotiraditya Scindia.

En route, he had a brief halt to have tea and 'samosa' at a roadside stall near Sadar Manzil.

He also posed for a selfie with the tea stall owner and his staff, Congress MLA from Indore Jitu Patwari told PTI.

After the roadshow, Mr Gandhi addressed a public meeting, during which he attacked the Modi government.

"Demonetisation was the biggest scam that the government of Prime Minister Narendra Modi has undertaken in four years which the Congress had not done in the last 70 years," the Congress leader said at the BHEL Dusshera Maidan.

PM Modi had on November 8, 2016 announced demonetisation, under which the Rs 500 and Rs 1000 currency notes existing then were scrapped with immediate effect.

"The scam was aimed at taking out money from the small traders to put into the pockets of 15 richest persons of the country," Mr Gandhi alleged.

He claimed that the BJP-led government has waived loans worth Rs 1.5 lakh crore which was the NPA of 15 big industries.

He questioned why the loans of farmers, who "have borrowed just Rs 5000", could not be waived.

"Those who took loans in lakhs and crores were called as 'Non-Performing Assets (NPA)', but when a farmer fails to pay Rs 5000 loan, you term him as 'defaulter'," Mr Gandhi said.

"When Congress comes to power in the country, it will waive the entire loan of farmers. The Congress had already done so by waiving Rs 70,000 crore loan earlier of the peasants," he said.

For generating jobs for the youth, the Congress government will ensure that mobile phones and other items will be manufactured here under 'Made-in-Madhya Pradesh' and 'Made-in-Bhopal, he added.

Mr Gandhi's roadshow, after passing through the main streets of the city, concluded at the Bharat Heavy Electricals Ltd's Dussehra Maidan at around 5 pm.

A large number of security personnel were deployed along the route of Mr Gandhi's roadshow. Besides the regular police force, an additional 1,500 policemen manned the streets of Bhopal, police officials said.