The Congress Chief, at the meeting with booth workers in Delhi, attacked the BJP government and said Mahatama Gandhi was "fearless" and never demonstrated bitterness despite spending years in jail. 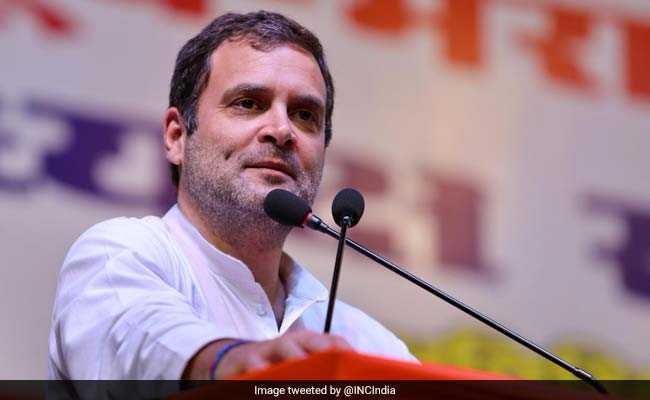 "Do you want Mahatama Gandhi's  India - where there is love, harmony - or Godse's India, where these is fear and hatred?" Congress Chief Rahul Gandhi asked today, a day after the Election Commission announced dates for national elections.

The Congress Chief, at the meeting with booth workers in Delhi, attacked the BJP government and said Mahatama Gandhi was "fearless" and never demonstrated bitterness despite spending years in jail.

He mentioned Mahatma Gandhi's assassin Nathuram Godse during his address to stress that BJP was spreading "fear" and "hatred" in the country.

"Our leaders fought bravely against the British, yet they spread love and harmony. On the other hand, "Veer" Savarkar wrote mercy petitions to British," the Congress chief said.

Veer Savarkar has been often praised by the BJP and the Shiv Sena in political speeches for his efforts in fight for India's freedom against the Britishers.

Asserting that the Congress will be forming government at the centre this year, he slammed the Modi government over rising fuel prices, among other issues.

He also reiterated Congress's commitment of minimum income guarantee for the poor.

Mr Gandhi shared a video of the meet on Twitter where he can be seen claiming that, under Modi government, "unemployment is the highest in 45 years".

I was happy to address our Congress Party Polling Booth Workers in Delhi this evening. Their energy & enthusiasm convinces me that the Congress party in Delhi will do extremely well in the general elections.

Here's a short video from the meeting. pic.twitter.com/TMzTIwZ4GA

The national elections, to be held in seven phases, will be begin April 11. Congress has been trying to forge a grand alliance of the opposition parties against the BJP.