Rahul Bajaj Asks Amit Shah: "If We Criticise You...". His Reply 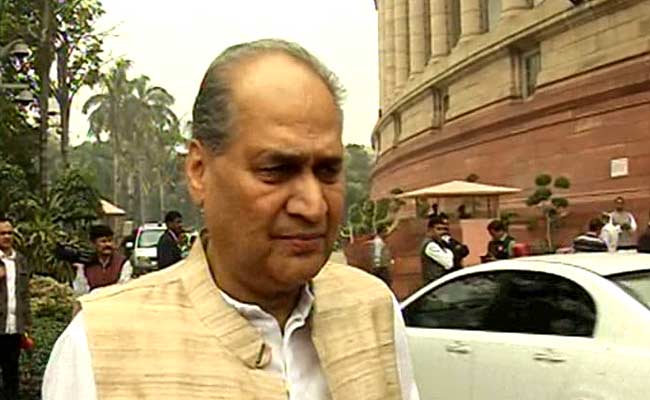 Home Minister Amit Shah said on Saturday that "no one needs to fear" criticising the Narendra Modi government. The senior BJP leader was speaking at a private event in Mumbai organised by business publication Economic Times when industrialist Rahul Bajaj told him that the people feared criticising Prime Minister Narendra Modi and his administration for fear of reprisals. Mr Bajaj, who prefaced his remarks by saying "you are doing good work", told the Home Minister "...if we criticise you there is no confidence that you will appreciate that".

In a video that has since gone viral Mr Bajaj, dressed in a blue silk shirt and a dark brown Nehru jacket, stands up to talk about an "atmosphere" that was not present during the second term of the Congress-led United Progressive Alliance (UPA); Mr Bajaj was also quoted as saying "UPA government mein kisi ko bhi gaali de sakte the (in the UPA government, we could criticise anyone we wanted to)".

The video has resulted in Rahul Bajaj trending on Twitter.

"This atmosphere... it is certainly on our minds. Nobody will say...our industrialist friends will not say it. I will say that openly. An environment should be created. You are going good work but if we criticise you there is no confidence that you will appreciate that. I may be wrong. But we all feel that..." the businessman said, adding, "I can't speak for everybody... I shouldn't say this...".

The Home Minister denied allegations there was an atmosphere of fear in the country.

"No need to fear about anything. The Narendra Modi government has been criticised continuously in media. But, if you are saying that there is such an environment, we need to work to improve this," Mr Shah responded.

It can be difficult to speak truth to power. Circumstances however, have made doing so increasingly necessary.#RahulBajaj stands out for his courage & integrity & for calling a spade a spade. pic.twitter.com/O6d7EWtiCd

The Congress tweeted this afternoon commending Mr Bajaj for "speaking truth to power". Simultaneously Amit Malviya, the BJP's in-charge of national information and technology cell, also tweeted, pointing out that Mr Bajaj being able to speak his mind showed the Modi government was, in fact, open to criticism.

Rahul Bajaj's question to Home Minister Amit Shah, now being hailed as speaking truth to power, had an equally detailed response. Where is the fear if one can speak his mind? pic.twitter.com/yJkFaSwL0e

Industrialist Kiran Mazumdar Shaw concurred with Mr Bajaj. "Hope the govt reaches out to India inc for working out solutions to revive consumption n growth. So far we are all pariahs n govt does not want to hear any criticism of our economy. (sic)," the Biocon Chairman tweeted on Sunday.

Rahul Bajaj's comments echoed those made by former Prime Minister Manmohan Singh. The veteran Congress leader, who is also a trained economist, has periodically offered PM Modi advice on the state of the Indian economy.

On Friday, after government data showed India's GDP slowing to 4.5 per cent in the July-September quarter - the lowest in over six years - Mr Singh urged the Prime Minister and his government to change the climate of society in the country "from one of fear to that of confidence".

During the course of the event Amit Shah also spoke about Kashmir, where hundreds of political leaders are still detained more than 100 days after the centre's contentious decision on Article 370. Amid fierce criticism of the government's decision to detain leaders, including three former Chief Ministers, Union Home Secretary Ajay Kumar Bhalla told a parliamentary standing committee last month that restrictions were imposed "in view of statements by senior leaders of state".

Mr Shah also defended his party against criticism that it had not dealt sternly enough with Bhopal MP Pragya Thakur. The fiery saffron-robed parliamentarian sparked controversy earlier this week by appearing to refer to Nathuram Godse, Mahatma Gandhi's assassin as a "deshbhakt (patriot)".

Pragya Thakur later apologised for her remarks, which she claimed were in reference to Udham Singh and not Godse.

"Neither the government, nor the BJP supports such remarks. We strongly condemn it," Mr Shah said, mirroring comments made by Defence Minister Rajnath Singh.