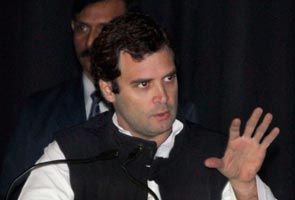 Lucknow: With Congress-led government facing criticism over issues of corruption and price rise, Rahul Gandhi has defended the party saying it was leading a coalition government which has its own "compulsions".

"It was a single party government then (during Indira Gandhi's prime ministership) while today it is a coalition and so has some compulsions," the 40-year-old Congress general secretary told college students during an interaction in Lucknow.

He was asked why the UPA government is "not able to control inflation and corruption as his grandmother and late Prime Minister Indira Gandhi could do".

Rahul noted that petroleum prices are governed by international maket, still steps are being taken to control prices, said a student, who took part in the programme.

Journalists were not allowed to attend the interaction. The Congress leader, who faced a volley of questions during the programme organised by the National Students Union of India (NSUI), urged the youths to take up politics as a "mission with a spirit of sacrifice and not as a career".

"Rahul said it should be taken as a sacrifice for the nation because if we take it as a career it would become a means to earn money and lead to corruption," a student said.

Asked whether he could have come so far in politics had he not belonged to a distinguished political family, Rahul said, "I may or may not have been here".

The students also questioned the need for reservation for the SC, STs and OBCs in education.

Rahul replied by asking students belonging to the general category in the hall to raise hands. He said that the very fact that those belonging to reserved categories have not been able to attend a session like was enough to underline that the reservation was "their right" and not a privilege as termed by a student.

He, however, said that by increasing the number of seats the interests of the general category students can be guarded.

When a student drew attention to the standards of education and health facilities in Uttar Pradesh and Madhya Pradesh, Rahul quipped, "Who has elected these governments?"

He said that since both these states have non-Congress governments he cannot do much but the Centre has initiated several schemes to ensure better education and it is for the states to implement them.

The Congress leader also asked the students not to compare India and China just because of the size of their populations as in certain areas like human rights and education, India was better placed than its neighbour.
Comments
Rahul GandhiIndira GandhiRahul on politics