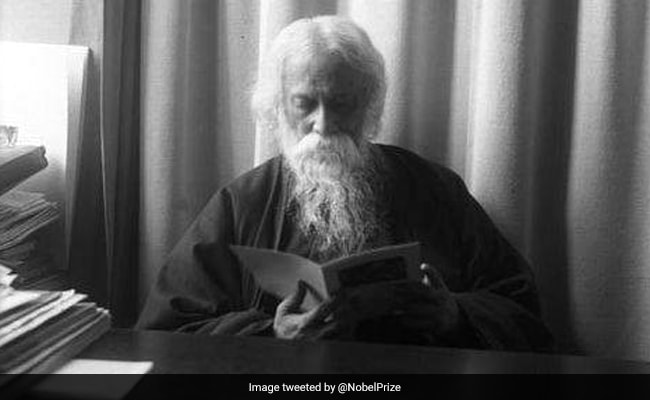 Today is Rabindranath Tagore's birth anniversary - Pachishe Boishakh - as it is known in Bengali. Tagore - the poet, novelist, essayist, philosopher and musician - is part of the everyday life of an average Bengali. He is one of those great masters of literature whose works hardly left any human emotion untouched. In the introduction to 'Gitanjali', for which Rabindranath Tagore won the Nobel Prize in 1913, WB Yeats wrote, "We write long books where no page perhaps has any quality to make writing a pleasure, being confident in some general design, just as we fight and make money and fill our heads with politics - all dull things in the doing - while Mr Tagore, like the Indian civilization itself, has been content to discover the soul and surrender himself to its spontaneity."

”His white hair flowed softly down both sides of his forehead (...) he gave an impression, to the boy I was then, of some ancient Oriental wizard.”

Literature Laureate Yasunari Kawabata on his memories from his middle-school days of the “sage-like poet” Rabindranath Tagore. pic.twitter.com/oWS657q1VP

Rabindranath Tagore has penned over 2000 songs, which are known as 'Rabindra Sangeet'. His works include hundreds of novels, short stories, dance-dramas, poems, essays and travelogues. Gora, Gitanjali, Rakta Karabi, Ghare Baire, Shesher Kobita, Raja O Rani, Tasher Desh, Dena Paona, Shanchayita are some of his best works, many of which have been translated into several languages.

''Tribute to one of the greatest thought leader, who gave us our National Anthem, Gurudev #RabindranathTagore on his Birth Anniversary...," the Ministry of Culture posted along with a beautiful montage of Tagore.

Tribute to one of the greatest thought leader, who gave us our National Anthem, Gurudev #RabindranathTagore on his Birth Anniversary. He became the voice of India's spiritual heritage and his poetry has influenced generations. @prahladspatel@secycultureGOI@PMOIndia@PIBCulturepic.twitter.com/cVsXj0h46i