According to reports, Rabi Pirzada has been asked to pay fines by the wildlife department for illegal captivity of the reptiles. 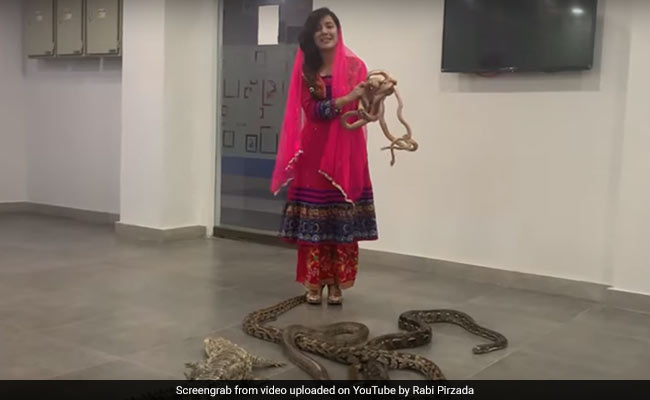 If convicted, Rabi Pirzada could be jailed for up to five years and fined as well

Pakistani singer Rabi Pirzada's move to threaten Indian Prime Minister Narendra Modi on the Kashmir issue with snakes and crocodiles has backfired as she has been fined by the authorities for posing with reptiles.

According to reports in Pakistani media, the singer has been asked to pay fines by the wildlife department for illegal captivity of the reptiles.

In a video posted earlier this month on her YouTube channel, Pirzada, raising the Kashmir issue, can be seen holding a snake, saying: "All these are gifts for PM Modi. My friends will feast on you."

She began the video by saying a Kashmiri woman and her snakes are ready to take on India. Several snakes and crocodiles can also be seen lying on the table in the video.

If convicted, Pirzada could be jailed for up to five years and fined as well.

The singer has, however, claimed that the reptiles don't belong to her and she had rented them for the video.

Upset by the development, she said in another video: "I have appeared in several news channels along with these snakes in the past five years. No one bothered to take action then.

"Unfortunately, now since I have warned Modi, I am facing action," she said.

Without naming anyone, she said such incidents make her believe that Indians are far better than "traitor Pakistanis".

"The wildlife department is one such traitor," Pirzada said.

"I never criticise Indians... I just target Modi. If you can't love Pakistan, at least don't betray your nation," she said.

The singer said she has not received anything in written from the wildlife department and would explore legal action if she receives something.

(Except for the headline, this story has not been edited by NDTV staff and is published from a syndicated feed.)
Comments
Rabi PirzadaPM Narendra ModiPakistan