"Quit IAS, But Not Joining Any Political Party For Now:" Topper Shah Faesal

Shah Faesal had quit the civil services on Wednesday, with media reports hinting that he may be joining former Chief Minister Omar Abdullah's National Conference. 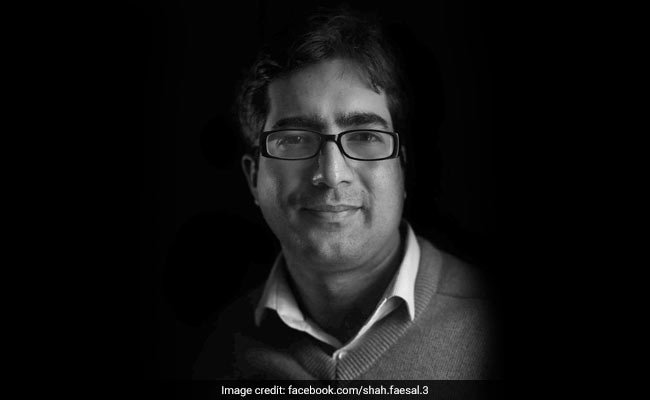 Kashmiri IAS topper Shah Faesal today said that while his resignation from the civil services was a "small act of defiance" aimed at reminding the central government of its responsibility towards his state, he is not planning to join any mainstream political party for now.

"I have ruled out all mainstream political parties at the moment. My idea is not to grab a chair or win an election. What I want to do now is engage people, talk to youngsters, see what are their aspirations, see how we can better represent them," he told NDTV in an exclusive interview.

Mr Faesal, however, clarified that he does plan to enter politics in the long run. "Parliament is definitely a place I am looking at, and I hope all existing political parties pitch in. While I have my idea of reimagining politics, other stakeholders can also be brought in," he said.

The IAS topper had announced his decision to quit the IAS in a Facebook post, stating that it was in protest against the "unabated killings" in Kashmir and the "marginalisation of Indian Muslims". Media reports had then claimed that he was likely to join former Chief Minister Omar Abdullah's National Conference.

"I will always be a proud former member of the service, but the right to life of the Kashmiri youth should be respected. I am doing this to protest the denial of justice to my fellow-Kashmiris and the lack of political initiative in the state," he said.

"I will be very happy to fight the next parliament elections," he said. "I will listen to youngsters and meet stakeholders."

The former civil services official criticised the BJP government's alleged attack on the state's "special position and identity", and said that it was indulging in such activities for electoral gains in the rest of the country. "The rise in lynch mob nationalism in our country dejects me. Also, attempts are being made to pit one region of the state against another," he said.

Mr Faesal cracked the Union Public Service Commission examinations in 2010, but kept a low profile in the years that followed. During the 2016 Kashmir unrest, he asked media organisations to stop contrasting him with Hizbul Mujahideen terrorist Burhan Wani.

However, the former IAS topper doesn't believe that his decision will discourage youngsters from taking up the civil services. "They should know that I am not leaving this job out of frustration... this was about leaving something that's very dear. This gives me a sense of giving up, of sacrifice, it's a very painful moment for me. But I had nothing else to give up that would bring the government's attention to all the killings happening in Kashmir," he said.

During a press meet held in Srinagar today, he had accused the Narendra Modi government of promoting the "culture of intolerance" while placing curbs on free speech and undermining central institutions such as the Central Bureau of Investigation.  "Earlier, I was not allowed to speak on these issues due to the civil services rules of conduct. Today, I am relieved at being allowed to do so," Mr Faesal said, adding that he was expecting support from youngsters across the state.

The former IAS officer said he is inspired by Pakistan Prime Minister Imran Khan and Delhi Chief Minister Arvind Kejriwal in politics, but  the situation is completedly different in Kashmir.  He also slammed the central government for failing to ensure the homecoming of Kashmir Pandits, stating that the state is "incomplete" without the exiled community.