Question 1: How Many Jobs Created Under MUDRA? RTI Starts From Question 2

MUDRA: The government claims 15.56 crore loans have been disbursed under the scheme since its inception, amounting to Rs 7.3 lakh crore

The Pradhan Mantri MUDRA Yojana was launched in 2015

The government claims 15.56 crore loans have been disbursed under the scheme since its inception, amounting to Rs 7.3 lakh crore.

Publicly available data matches these numbers, but what is the reality on job creation under the scheme?

NDTV filed an RTI with the Ministry of Micro, Small and Medium enterprises seeking information on how many jobs MUDRA (an acronym for Micro Units Development and Refinance Agency Ltd) has been able to create.

The first question NDTV asked was "how many jobs were created under MUDRA, and on what basis was the figure arrived at?"

The RTI response completely ignored the first question, addressing only the second and third query on the total loans extended, and reiterating the government's stance that there has been "job growth". No data was provided to back that claim. 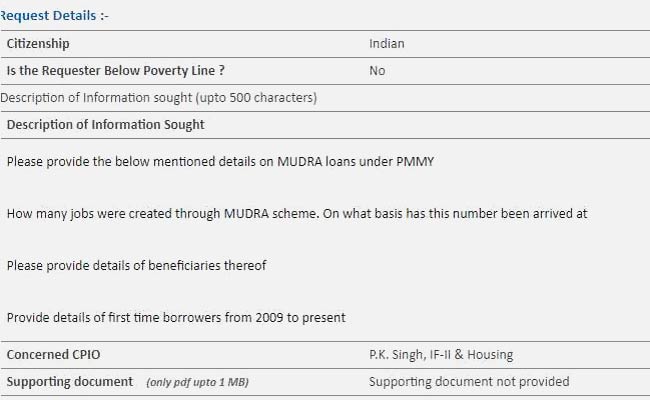 The RTI query (above) with the questions on MUDRA. The reply (below).

In an interview to NDTV, the government think tank NITI Aayog's Vice Chairman Rajiv Kumar said that they had "no firm numbers" on jobs created through the MUDRA scheme while affirming that "new jobs have been created".

In July 2017, the then CEO of MUDRA Jiji Mammen had told NDTV that there is "no assessment of jobs" created under MUDRA.

A review of MUDRA lending finds that 90 per cent of the loans extended through the scheme amounted to Rs 50,000 or less (under the MUDRA scheme, loans up to Rs 10 lakh are provided to start micro units), raising questions over the extent, quality and sustainability of job creation through these loans.

Further, the MUDRA component in the MFI loans is miniscule. (MUDRA offers a refinance facility to banks and MFIs).

The MUDRA component in lending by banks and MFIs varied between 1 per cent and 3 per cent. In fact, fewer MFIs used the facility in 2017, bringing down the loans taken from MUDRA to 0.4 per cent from 1.3 per cent in 2015.

Queries sent to MUDRA have so far not elicited a response.