QUAD Summit 2022: Both Prime Ministers affirmed their desire to continue the positive momentum in the bilateral relationship, it added. PM Modi extended an invitation to the Australian PM to visit India at an early date. 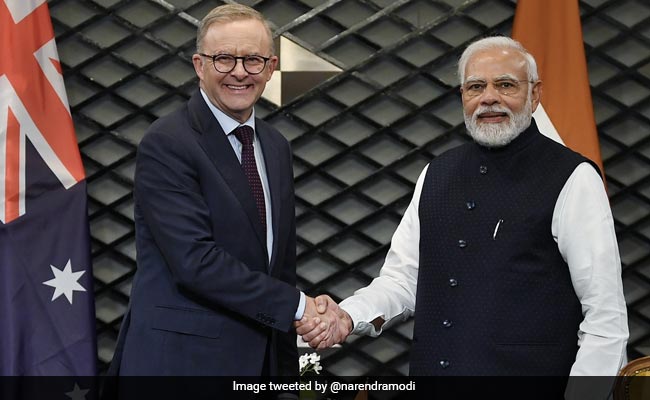 Prime Minister Anthony Albanese said that Australia will host the next Quad summit in 2023.

Prime Minister Narendra Modi today held "fruitful" discussions with Australia's newly-elected Prime Minister Anthony Albanese on the sidelines of the Quad Summit here during which the two leaders reviewed the multifaceted bilateral cooperation and reaffirmed their desire to deepen it.

The two leaders are in Japan for the second in-person Quad leaders' summit.

"India's Comprehensive Strategic Partnership with Australia is robust and benefits not only the people of our nations but also the world. Was delighted to meet PM @AlboMP and take stock of bilateral ties. We discussed ways to add even greater momentum across key sectors," Prime Minister Modi tweeted.

"Both leaders reviewed the multi-faceted cooperation under the Comprehensive Strategic Partnership, including in trade & investment, defence manufacturing, renewable energy including green hydrogen, education, science and technology, agricultural research, sports and people-to-people ties," the Ministry of External Affairs (MEA) said in a press release.

Both Prime Ministers affirmed their desire to continue the positive momentum in the bilateral relationship, it added.

"Warmly welcomed my meeting with @narendramodi for an engaging discussion on Australia and India's full strategic and economic agenda, including on clean energy technology. Australia-India ties have never been closer," Prime Minister Albanese tweeted.

Earlier, the two leaders attended the Quad summit along with US President Joe Biden and Japanese Prime Minister Fumio Kishida.

"Today I had the pleasure of meeting with PM Kishida @JPN_PMO, @POTUS and @narendramodi at the Quad Summit in Tokyo. We affirmed our shared commitment to the Quad, and to a free, open and resilient Indo-Pacific. I look forward to hosting Quad Leaders in Australia in 2023," Prime Minister Anthony Albanese tweeted.

He said that Australia will host the next Quad summit in 2023.