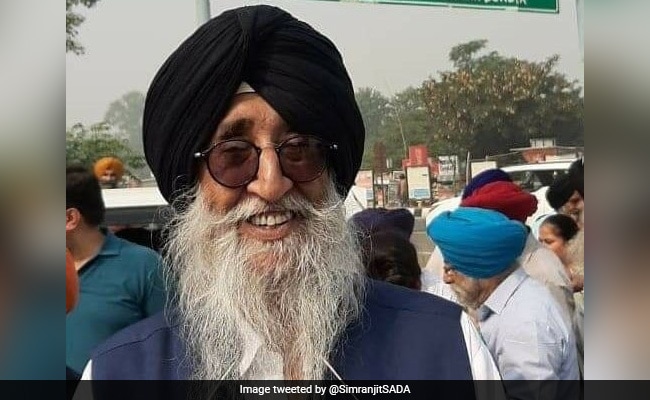 A Punjab MP has waded into controversy with his comment on freedom fighter Bhagat Singh. Newly elected Sangrur MP Simranjit Singh Mann, who is also the chief of the Shiromani Akali Dal (Amritsar), referred to Bhagat Singh as a "terrorist".

"Bhagat Singh had killed a young, English naval officer, he had killed an Amritdhari Sikh constable, Channan Singh. He hurled a bomb at the National Assembly at the time. Now you tell me whether Bhagat Singh was a terrorist or not," Mr Mann had said.

Mr Mann is a controversial leader in Punjab politics. After recently winning the bypoll from Punjab Chief Minister Bhagwant Mann's home turf Sangrur, the MP attributed his victory to Khalistani militant Jarnail Singh Bhindranwale and said he would raise the issues of "Indian Army's atrocities in Kashmir" in parliament.

Simranjit Singh Mann had also said he would flag the "killing of tribal people in Bihar and Chhattisgarh calling them Naxalites".

Punjab's ruling Aam Aadmi Party, or AAP, government has demanded Mr Mann to apologise for the comment that hurt sentiments and disrespected the freedom fighter.

"Shameful and pitiful. Sangrur MP, Simranjeet Singh Mann, calling revolutionary freedom fighter Bhagat Singh a 'terrorist' is disgraceful and disrespectful. Punjabis are connected to the ideology of Bhagat Singh and we strongly condemn this irresponsible comment," the AAP tweeted.

AAP MP Raghav Chadha said it's "shameful that some call him a terrorist". "Shaheed-e-Azam Bhagat Singh is a hero, a patriot, a revolutionary and a true son of the soil. Inquilab Zindabad," Mr Chadha tweeted.

Shameful that some call him a terrorist. Shaheed-e-Azam Bhagat Singh is a hero, a patriot, a revolutionary and a true son of the soil.