Amarinder Singh said the second memorial was a tribute to all those unknown martyrs who laid down their lives in the massacre. 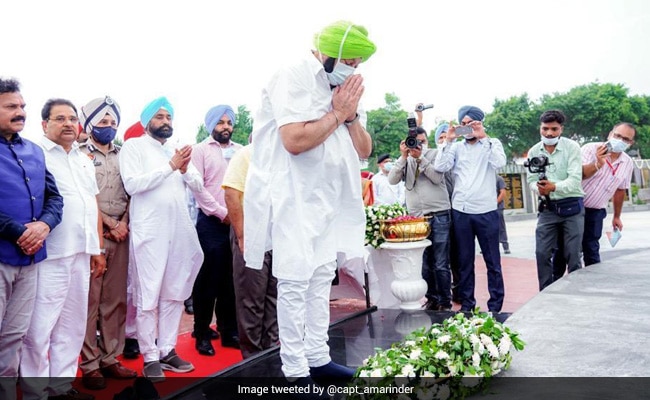 At an emotionally charged event, Punjab Chief Minister Captain Amarinder Singh on Saturday inaugurated the Jallianwala Bagh Centenary Memorial Park in the memory of people who lost their lives in the massacre of April 13, 1919.

Mr Singh said that while the original memorial had been built to remember people who were known to have been killed in the Jallianwala Bagh massacre, this second memorial was a tribute to all those unknown martyrs who laid down their lives in the massacre.

"Nobody knows the exact number of lives lost. Though the Deputy Commissioner (DC) office has the names of only 448 who fell to the bullets of the British led by General Dyer who fired on the orders of the then Governor of Punjab Michael O'' Dwyer, with 1250 bullets fired on that day, the number would have actually run in thousands," he stated.

Mr Singh disclosed that a Special Research Team of historians and research scholars has been constituted by Guru Nanak Dev University (GNDU) for carrying out research on martyrs of Jallianwala Bagh and freedom fighters who were imprisoned at Cellular Jail, Port Blair.

"Once the research is completed, the names of more martyrs might be discovered. Sufficient space has been kept on the columns of the memorial to incorporate more names in the future. Currently, the names of the officially known 488 martyrs have been inscribed on the black and grey granite stone walls of the memorial," he added.

Recalling that he had laid the foundation stone of the memorial on January 25 and promised to complete it by August 15, Singh congratulated the Departments of Cultural Affairs, Architecture and Public Works Department (PWD) for designing the park and completing the construction in the promised timeline.

The Chief Minister paid floral tributes to the unsung heroes and honoured 29 family members of the martyrs who died in the massacre. He also posed for a group photo with them. He appreciated the mural designed by Bengali artist Moloy Ghosh to portray the historic massacre.

The memorial has been built over 1.5 acres at a cost of Rs 3.5 crore at Amrit Anand Park, Ranjit Avenue. Soil from villages around the state was brought to the site for the construction of the memorial to fill up the space below the sacred platform as a befitting tribute to them.

The newly inaugurated memorial consists of five white stone pillars rising upwards. The pillars symbolize the spirit of the martyrs rising towards the sky. The different heights of the five pillars correspond to various age groups of martyrs - children, teenagers, youth, middle aged and the elderly. They also signify the five fingers of the hand and the cohesive power of the martyrs who sacrificed their lives for the nation.

The white colour of the stone is a symbol of the purity of their sacrifice. The central black stone on a circular platform from where these pillars arise symbolise the empty space and the void created by the sacrifice of these martyrs.