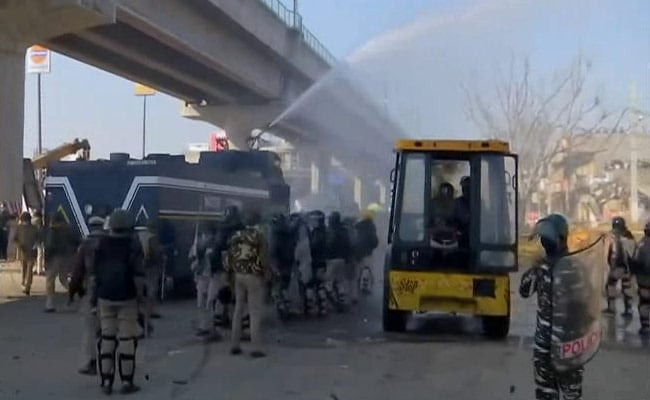 Punjab Chief Minister Captain Amarinder Singh welcomed the Centre's decision to allow farmers to enter Delhi for a planned protest against new farm laws after a morning of clashes with the police at the border with Haryana.

"They (the centre) should also now initiate immediate talks to address farmers' concerns on the farm laws and resolve the simmering issue," he tweeted pressing on his demand that the BJP-led Union government not wait till December 3 to hold a second round of ministerial talks with leaders of farmers' unions.

Captain Amarinder Singh, however, continued his criticism of the neighbouring government in Haryana - also a farming state - for its continued use of force against farmers trying to cross over to as part of their ongoing "Delhi Chalo" protest.

Centre has now allowed farmers to enter Delhi, yet the @mlkhattar govt. is resorting to brutal force to stop them from marching peacefully to the national capital? What's the need for such harsh measures? This barbarism needs to stop right now @mlkhattar ji.

Stating that use of force should stop immediately, Mr Singh appreciated the retrain showed by farmers in face of water cannons, tear gas shells, lathi-charge, barb-wire barricades and trenches dug to impede their progress.

"Their exemplary behaviour shows that farmers are not interested in confrontation, they only want to be heard, which is their constitutional right," he said in view of the tense situation at the Delhi border where farmers faced police action on Friday.

He added that the voice of farmers cannot be "muzzled indefinitely".

Earlier in the day, the Punjab Chief Minister, whose government had recently cleared four bills negating the three laws at the root of farmers' protest, had urged the central government to "show statesmanship and accept the farmers' demand for assured MSP (minimum support price)".

"If they can give verbal assurance, I fail to understand why they can't make it a legal obligation of the Government of India," the Congress leader questioned a day after being accused of instigating farmers to continue their protest.

The accusation had become the focal point of a heated exchange with Manohar Lal Khattar, the Chief Minister of BJP-ruled Haryana which continues to stop farmers from marching to Delhi.

He added that those who accused the Congress of instigating farmers were "blind", adding that the farmers were fighting for their "lives and livelihood".

Earlier on Friday, farmers' organisations behind the protest - which has been in planning for two months - had also written to Prime Minister Narendra Modi demanding negotiations and permission to reach Delhi to make their demands heard.

Farmers have been protesting against the Centre's three farm laws. They have expressed apprehension that the new laws would pave a way for the dismantling of the minimum support price system, leaving them vulnerable to exploitation by big corporates.

They have been demanding that these new laws should be repealed.