With tensions at the borders continuing, India will have to be prepared to deal with any eventuality, said Punjab Chief Minister Amarinder Singh in his Independence Day address in Mohali. 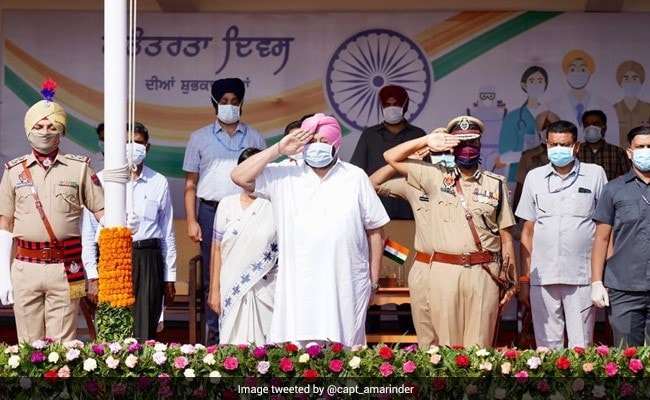 Amarinder Singh also saluted the health workers and paramedics for the fight against coronavirus.

Pitching for the revival of the state economy, Punjab Chief Minister Amarinder Singh on Saturday announced relief for landless farmers and said his government will help youth get six lakh jobs over the next two years.

The Punjab CM also called for readiness to combat the border threat from Pakistan and China. With tensions at the borders continuing, India will have to be prepared to deal with any eventuality, said the CM in his Independence Day address in Mohali.

He said of the six lakh jobs, one lakh will be provided in the government sector.

The CM said his government will give debt relief to the tune of Rs 520 crore to landless farmers and workers.

According to an official release, he added that Rs 4,700 crore has already been disbursed to 5.62 lakh farmers under a debt waiver scheme of the government.

He said his government will soon enact a new land leasing law to secure land ownership and the rights of tenants on agricultural land.

The CM claimed that Rs 63,000 crore investment has already been realised on the ground with the potential of two lakh jobs in the state.

Mr Singh further said with the launch of a smart ration card scheme, 1.41 crore beneficiaries will become eligible to get ration from fair price shops.

To boost the infrastructure of the state, the CM announced the construction of 1,300-km of state and national highways at over Rs 12,000 crore in the next two years.

While 28,830 km of rural link roads have already been repaired over the past three years with an expenditure of Rs 3,278 crore, the next two years will see the repair of another 6,162 km of link roads at Rs 834 crore, he said.

The CM also announced the construction of 750 rural sports stadiums. He announced a Rs 2,500 crore investment over the next two years in Phase II of the smart village campaign (SVC). He claimed that the Phase I covering 19,132 rural works has already been completed at a cost of Rs 835 crore.

All rural households of the state will have piped potable drinking water connections in the next two years with an expenditure of Rs 1,200 crore, he added. Though work on "Mata Tripata Mahila Yojana" and "Mata Kasturba Mahila Yojana", aimed at social and economic empowerment of women had been delayed due to Covid, the schemes will soon be back on track, said the Chief Minister.

His government will finalise a scheme for economic empowerment of persons with disabilities, he said.

About the threat from the two neighbouring countries, the CM said the country will have to be prepared to deal with any eventuality.

While Pakistan continued to resort to firing every day, China, on the other hand, talks about friendship but remains a danger to the nation, said Mr Singh while recalling the recent attack on Indian soldiers by the Chinese forces in Ladakh.

India has always given Pakistan a befitting response, which is the only way to deal with them, he said, adding that China also needs to be handled with the same iron hand.

The CM also recalled the contribution Indians to the freedom struggle and said Punjabis had always been at the forefront of every battle.

The Cellular Jail referred to as "Kala Pani" (in Andaman and Nicobar Islands) have the names of tens of hundreds of Punjabis etched in immortality, he said according to an official release.

Paying his tributes to Punjab's freedom fighters, Singh reiterated his government's commitment to extend all benefits of freedom fighters to their next generations (grandchildren).

Mr Singh also saluted the health workers and paramedics for the fight against coronavirus.

The CM made a special mention of people who had performed exceptional service during the pandemic and said awards will be bestowed on them his government on January 26 next year.

He also acknowledged the work done by farmers for feeding the nation during the lockdown period.

He lauded industrialists who had shown "remarkable resilience" in recovering from the extreme slowdown caused by the coronavirus pandemic.