With folded hands, Aekom Warring goes from house-to-house greeting voters and asking them to elect her father for the development work carried out by him in the last 10 years. 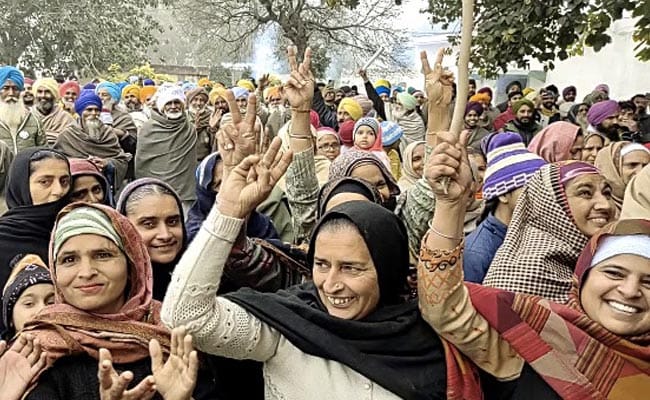 Fifteen-year-old Aekom Warring maybe too young for politics but not for canvassing and is busy making a connect with voters in her father Amarinder Singh Raja Warring's Gidderbaha Assembly constituency in Punjab.

With folded hands, Aekom Warring goes from house-to-house greeting voters and asking them to elect her father for the development work carried out by him in the last 10 years.

Amarinder Sing Raja Warring is eyeing a third term in a row from Gidderbaha Assembly seat in Punjab's Muktsar district. He was earlier elected from this seat in 2012 and 2017.

Family members of several other contestants in the fray for the February 20 Punjab Assembly polls are going door-to-door to garner support for the coming elections.

With a ban on big gatherings and rallies by the Election Commission of India in view of COVID-19, family members of candidates are meeting voters personally to ensure they vote for their contestants.

Aekom Warring exudes confidence that voters of Gidderbaha will vote for her father for the "unprecedented" development works carried out during the last 10 years and make him victorious again.

"My father did what he promised to the people of the area," she says while adding that she is getting a very good response from the people.

An elderly man in a village even praises Amarinder Singh Raja Warring for ensuring water to his fields when the teenager visits his house.

Goldy, who is a sitting MLA, will again contest from Dhuri assembly segment. He will take on Aam Aadmi Party's chief ministerial face Bhagwant Mann in a high-stake electoral contest.

A post graduate in English, Khangura, 39, says she is visiting each and every house of the constituency and is getting a very good response from the voters.

Starting her campaigning at 7:30 am, Khangura returns home in the evening only.

"It is not that for the first time or second time I am visiting people. I frequently go to them and I get a warm welcome," she says On how she views AAP leader Bhagwant Mann as a contestant against her husband, Khangura says she does not see him anywhere.

She claims Mann, a two-time MP from Sangrur Lok Sabha seat, visited Dhuri constituency only twice in 2014 and 2019 during the Lok Sabha polls.

"Bhagwant Mann has not been seen in this constituency," Khangura told PTI.

The AAP leader does not have anything to say for what he did for this area, she adds.

She says her husband Goldy has done a lot of development work including setting up several sports grounds, smart schools and upgrading some schools in Dhuri Assembly constituency.

Dhuri is one of the assembly constituencies which fall under Sangrur Parliamentary constituency. Punjab goes to polls on February 20 and is set for a multi-cornered contest.