The death of Rithik Roshan is a stark reminder of a similar shocking incident two years ago in Sangrur district where two-year-old Fatehvir Singh had died after he fell into a 150-foot-deep abandoned borewell. 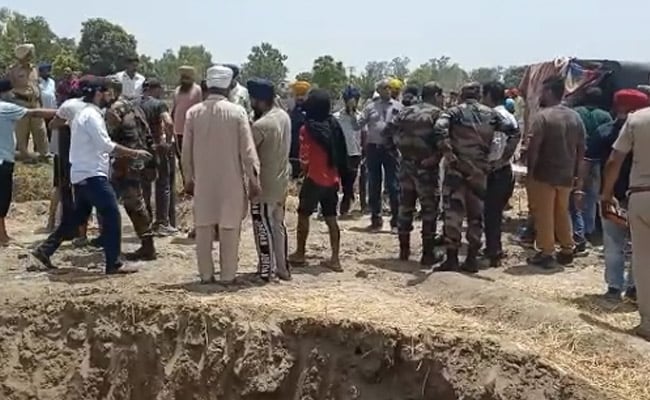 The boy got stuck at a depth of 74 feet where the pipe was seven-inch wide.

A six-year-old boy, who fell into a 300-foot deep borewell on Sunday, died though he was taken out of it after a seven-hour-long rescue operation at Khiala Bulanda village near Bairampur in Punjab.

The death of Rithik Roshan is a stark reminder of a similar shocking incident two years ago in Sangrur district where two-year-old Fatehvir Singh had died after he fell into a 150-foot-deep abandoned borewell.

Hoshiarpur Deputy Commissioner Sandeep Hans said the entire episode will be investigated as after the Sangrur incident it was decided that no borewell would be kept open in future.

Rithik was playing in a field and he climbed a borewell shaft when some stray dogs started chasing him.

The nine-inch-wide borewell shaft was covered with a jute bag and could not withstand the weight of the boy and gave in, causing him to fall into the borewell on Sunday morning.

Rithik was brought out of the borewell in a joint operation carried out by the National Disaster Response Force, Army personnel and locals, said officials.

He was taken to a local government hospital where the doctors declared him dead.

Senior Medical Officer of local government hospital Dr Sunil Bhagat said the body had turned blue and was stiff when it was brought to the hospital.

However, doctors made resuscitation for more than half an hour and also administered a number of life-saving injections to him, but all their efforts failed.

The boy got stuck at a depth of 74 feet, where the pipe was seven-inch wide, said official sources.

The boy belonged to a family of migrant labourers.

A camera was put inside the borewell to monitor the boy's condition, said the officials, adding that high flow oxygen was also provided through pipes.

Punjab Chief Minister Bhagwant Mann expressed grief over the death. He announced to give Rs 2 lakh as compensation to the boy's family.