Dilip Ghosh and Sukanta Majumder refused to attach much importance to the incident and blamed "Trinamool Congress agents" for the brawl while asserting that the BJP rank and file was solidly behind the new state leadership. 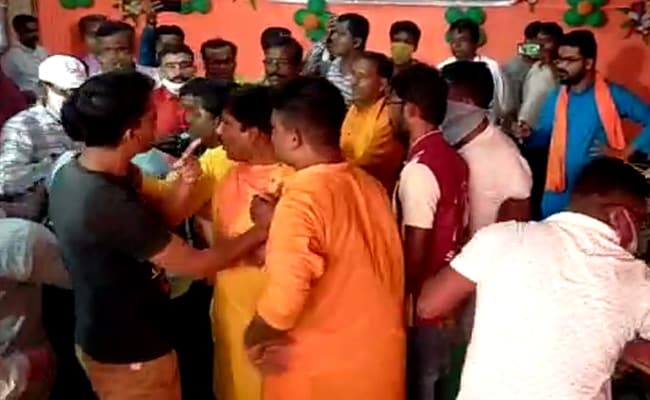 Visuals showed the BJP workers engaging in a fist fight.

Rumblings of discontent within the Bharatiya Janata Party's Bengal unit spilled out in the open, when two factions within the party brawled in the presence of state BJP President Sukanta Majumder and his predecessor Dilip Ghosh at Katwa in Paschim Bardhaman on Friday.

While talking to reporters both Mr Ghosh and Mr Majumder refused to attach much importance to the incident and blamed "Trinamool Congress agents" for the brawl while asserting that the BJP rank and file was solidly behind the new state leadership.

As the two leaders arrived at Daihat in Katwa for an organisational meeting of the party, one group started shouting against the leadership of Dilip Ghosh, who had been the BJP state President till mid-September blaming them for aiding ordinary party workers when they were facing "attacks from Trinamool Congress after the assembly poll results."

As the shouting continued before the media, another faction soon tried to push away the protestors from the spot resulting in a fight where besides fisticuffs, chairs were also thrown.

Normalcy was finally restored after some time by district level leaders.

Mr Ghosh, currently the national Vice-president of BJP, and Majumder sat through the pandemonium stoically.

Since losing the assembly elections earlier this year, BJP has witnessed a large number of workers and regional leaders in the state deserting the party, most of them for the ruling TMC.

Former Union Minister Babul Supriyo was among the prominent names who recently joined the Trinamool Congress.

Blaming Trinamool Congress for the brawl, Mr Majumder told reporters "the TMC had sent agents to foment trouble at our meeting. We will identify the trouble makers."

Told that both sides had known BJP workers in the area, he added "if any of our 'karyakartas' (activists) are involved we will take action."

Mr Ghosh said, those resorting to such protests "were new entrants to the party from Trinamool Congress before the assembly polls and are not true BJP workers who believe in its ideology. We don't want them in our party."

A district Trinamool leader denied the charges of BJP and said "the squabble within the party is now a public knowledge."

"Unable to stem dissent and keep its house in order, BJP is blaming TMC," he added.

Mr Majumder, accompanied by Mr Ghosh, is on a tour to different districts to meet party workers after taking over.