Dungarpur Protest: The violence started Thursday after candidates of a 2018 qualifying exam blocked the Udaipur-Ahmedabad highway, throw stones at the police and torched their vehicles

Two people were killed and another two injured in Rajasthan's Dungarpur after four days of violent protests by members of tribal communities over the recruitment of government school teachers.

The violence started Thursday after candidates of a 2018 qualifying exam blocked the Udaipur-Ahmedabad highway, threw stones at the police and torched their vehicles. The protesters also damaged several buildings. The police said the violence forced them to open fire.

Late Sunday night the situation appeared to be returning to normal, with the Udaipur-Ahmedabad highway cleared and traffic also resuming along National Highway 8, which connects Mumbai to Delhi and saw a traffic jam of trucks because of the violence.

It is unknown if the deaths - one of which was on late Saturday night and another at around 3 AM Sunday - happened during police firing. An official from the Dungarpur Police Control Room said a van had been torched in the Ransagar area around the same time.

There were also reports of protesters entering residential areas.

Two companies of the police's Rapid Action Force were deployed to deal with the situation. The government had shut internet services across the district in an attempt to regain control.

The tribal community members, who have been protesting for over two weeks now, are demanding that the 1,167 vacant posts - which are reserved for general category applicants but have been lying unclaimed because of a lack of qualified candidates - be given to those from their communities. 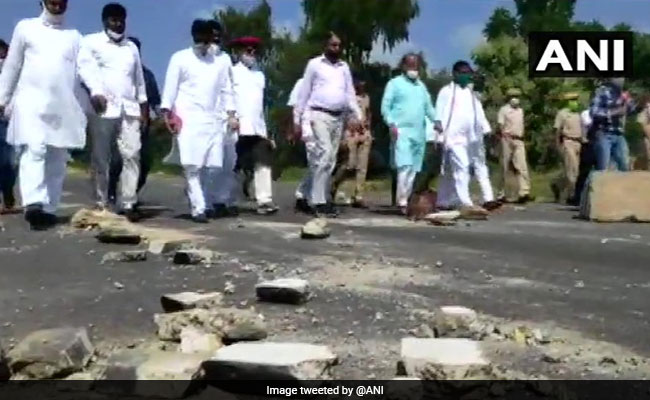 Dungarpur violence: The protesters have blocked the Udaipur-Ahmedabad highway

"We have appealed to the protesters to stop and restore peace. There was general consensus on this in the meeting. All public representatives of the area were present," Mr Bamaniya, who holds the Tribal Development portfolio, told reporters after the meeting.

Mr Singh said the officers had been told to deal with "anti-social" elements and restore peace.

The protestors have so far torched over 25 vehicles and ransacked several shops, hotels and a petrol pump, a police official told PTI.