Ten people, including three women, were shot dead in a village in eastern Uttar Pradesh's Sonbhadra district, over a land dispute. 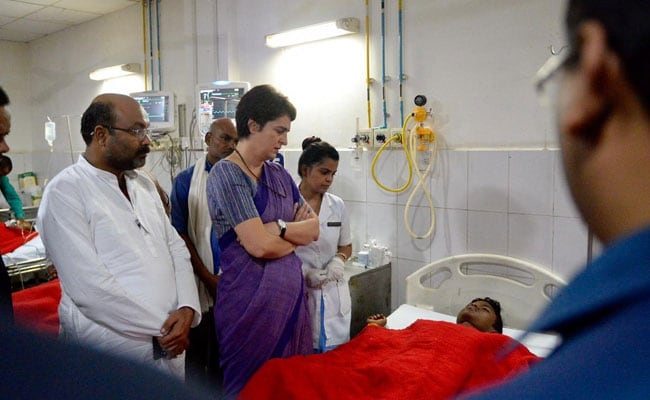 Ten people, including three women, were shot dead in a village in eastern Uttar Pradesh's Sonbhadra district, over a land dispute. Twenty three others were injured in the shootout. Twenty four people have been arrested in connection with the firing.

The day the incident took place, she had criticised the Uttar Pradesh government for the law and order situation in the state.

She had tweeted, "In the BJP ruled state, the confidence of criminals is so high that broad day-light killings are continuously happening. The killing of 9 Gond tribesmen, including 3 women, by the land mafia in Umbha village of Sonbhadra is heart-wrenching. Administration and Chief Minister are all sleeping. Is this how the state will become crime-free?"

The incident took place in the Ubha village in the district, where a village chief, identified as Yagya Dutt, had purchased 36 acre agricultural land two years ago. On Wednesday (July 17) he and his associates went to take possession of the land. The villagers opposed the village chief after which his men allegedly opened fire at them, police said.

"It is an incident in the remote area in Ghorawal, village Ubha. The pradhan purchased 90 bigha (36 acres) land two years ago. Today he went with some of his allies to take possession (of the land). Local villagers opposed. As a result, they (village chief's men) opened fire causing death of nine villagers, including three women,"a senior police officer said.

"The pradhan (village) brought along many people in tractors and started ploughing his land. The villagers started opposing it. At this point, he and his men started firing indiscriminately at the villagers," Salmantaj Patil, the police chief of Sonbhadra, said.

The piece of land had caused tension between the village chief and the villagers in the past, police said.

"This particular piece of land had caused tension earlier too and the police had got involved. The village chief had alleged that the villagers had illegally occupied his land. The police had asked both sides to back off and the district administration had even decided to take over the land, those proceedings had been initiated," PV Ramasastry, the police officer in-charge of law and order in UP, said.

Chief Minister Yogi Adityanath has taken cognizance of the incident and has expressed his condolences to the families. He has directed the district magistrate to provide immediate medical attention to the injured. He has also directed the state's police chief to personally monitor the case and ensure effective action to catch the culprits.

People With A, B Blood Groups, Rh+ More Susceptible To Covid: Study