Priyanka Gandhi Vadra To Address Rally In Gujarat On February 28

Besides Priyanka Gandhi Vadra and Rahul Gandhi, the rally will also be addressed by Sonia Gandhi, who last made a public speech in November last year in Telangana during the Assembly polls. 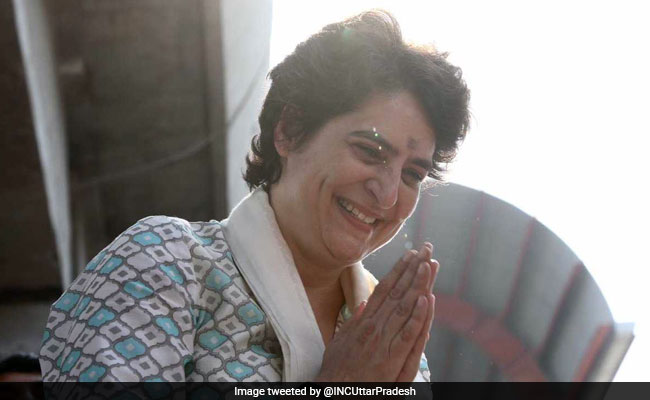 Congress General Secretary Priyanka Gandhi Vadra will address her first public rally in Gujarat along with brother and party President Rahul Gandhi on February 28, signalling the intent to take on Prime Minister Narendra Modi and BJP chief Amit Shah in their home state.

The mega rally to be held at Trimandir Ground, Adalaj, will follow the meeting of the Congress Working Committee (CWC), the party's highest decision-making body, in Ahmedabad on February 28. The 51st CWC meeting, to be held just before the schedule of general elections is announced, will focus on strategising and preparing for the Lok Sabha polls.

The CWC meeting is being hosted in Gujarat after 60 years and the entire top Congress leadership - Rahul Gandhi, UPA Chairperson Sonia Gandhi, former Prime Minister Manmohan Singh, Congress Parliamentary Party leader Mallikarjun Kharge, Leader of the Opposition in the Rajya Sabha Ghulam Nabi Azad and Priyanka Gandhi among others will discuss issues and the roadmap for the Lok Sabha polls.

Besides Priyanka Gandhi Vadra and Rahul Gandhi, the rally will also be addressed by Sonia Gandhi, who last made a public speech in November last year in Telangana during the Assembly polls.

The Adalaj rally follows Rahul Gandhi's February 14 address in tribal Lal Dungri village in Valsad district. This is the same village where his grandmother Indira Gandhi in 1980, his father Rajiv Gandhi in 1984 and his mother Sonia Gandhi in 2004 started and romped home to power.

Gujarat Congress MLA and party spokesperson Shaktisinh Gohil said the Adalaj rally will be the biggest in Gujarat in recent times.

"The preparations are in full swing for the rally which will be the biggest in Gujarat's history. On the one hand, the resentment against Modi and the BJP is palpable in Gujarat and on the other, the enthusiasm among the people and party cadres is on an all-time high.

"This will be the first time that the people of Gujarat will witness Rahul Gandhi, Sonia Gandhi and Priyanka Gandhi address from the same podium," Mr Gohil told IANS.

After being appointed as the General Secretary in charge of east Uttar Pradesh, Priyanka along with brother Rahul and fellow General Secretary Jyotiraditya Scindia held a road-show in Lucknow on February 11 and also interacted with party cadres.

Priyanka Gandhi Vadra cancelled her maiden press meet as the Congress General Secretary in Lucknow on February 14 following the terror attack in Jammu and Kashmir in which 40 Central Reserve Police Force (CRPF) troopers were killed.

Gujarat Congress chief Amit Chavda said the motive behind having the CWC meet and the rally in Gujarat was to send a strong signal to the BJP in PM Modi's home state where the Congress in the 2017 Assembly polls gave a tough fight.

"Through the Adalaj rally, the entire Congress leadership will give voice to the people of Gujarat and the country whose aspirations have been crushed by the Modi government," said Mr Chavda.

"Buoyed by the good showing in the Assembly elections, the morale of the party will be further boosted by the presence of the entire top Congress leadership. This rally will signal the demise of the Modi government," said Mr Chavda exuding confidence of the Congress doing well in Gujarat.

Blown away by the "Modi wave", the Congress failed to win even a single seat in 2014 in Gujarat which sends members to the Lok Sabha.

A little over 15 km from Ahmedabad, Adalaj is famous for Rudabai Stepwell that was built in 1498 in the memory of Rana Veer Singh of the Vaghela dynasty. It is also famous for the expansive non-sectarian Trimandir temple.

The Trimandir is home to the idols of gods of Jainism, Shaivism, and Vaishnavism along with gods and goddesses from other religions.