Prime Minister Narendra Modi said Venkaiah Naidu had risen from the grassroots and would lead Indian polity to greater heights.

It showed the "maturity of Indian democracy and the strength of India's Constitution," said PM Modi, who sold tea at a stall in Gujarat when he was a young boy. He talked of how Mr Naidu, a farmer's son, rose to hold top positions in government, always in touch with his roots. "I always felt that he touched more on villages and farmers ...with a greater interest...it has been close to his heart."

Mr Naidu, the Prime Minister said, had risen from the grassroots and would lead Indian polity to greater heights, PM Modi said.

The inference was not lost on the Congress, for decades led by the Nehru-Gandhi dynasty. "Rich and poor is not the question," said the party's Ghulam Nabi Azad, who is Leader of the Opposition in the Upper House. There were many people, he said, in high posts who came from families of limited means, but added, "salute the society who made this possible but also those who were rich back then. Jawaharlal Nehru was a big lawyer; by today's standards he might have been earning up to 10 crore a day. Gandhiji had a good family background, that is why he reached South Africa. But people like these sacrificed everything for the nation." 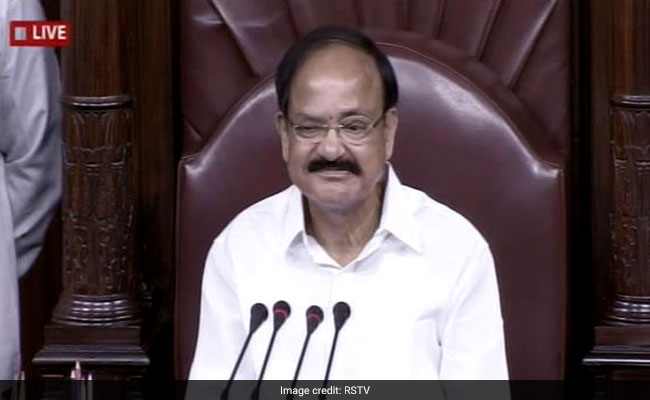 The Congress leader then reeled off a string of names of leaders who he said "were well-off but sacrificed everything and gave us a nation where anybody can be the President, Vice-President, Army Chief. "

Mr Naidu, 68, walked into the Rajya Sabha today to loud cheers and a standing ovation. He was elected earlier this month as Vice President, defeating former West Bengal Governor Gopal Gandhi who was fielded by a joint opposition. A seasoned parliamentarian, Mr Naidu was, till he resigned to contest the vice presidential election, a senior Union Minister. He has also served as the BJP's president.

PM Modi, who welcomed Mr Naidu as soon as the Upper House convened today, the last day of the monsoon session, said  "Mr Venkaiah Naidu is the first Vice President to be born in Independent India. He is the the only VP according to me who has been for years in this (Parliament) complex, among all these people. He is acquainted with all nitty-gritties of all procedures and functions of the House."

Ghulam Nabi Azad too referred to Mr Naidu's experience as a parliamentarian and hoped that "the legacy of not allowing any Bill to be passed in a jiffy will continue."

Promoted
Listen to the latest songs, only on JioSaavn.com
"You as an MP and a minister have been witness to a custom, that everybody has the freedom to express themselves here. This is the forum given to us by our Constitution... MLAs are elected by crores and they send us here...So this House has a dual responsibility, towards the public and the state legislatures," the Congress leaders said.

The Samajwadi Party's Ram Gopal Yadav said bills must not be passed amid shouting and chaos, and wished Mr Naidu luck saying, "Hope after Vice President you will move to the next top post," referring to post of President of India.

All Probe Agencies Are Welcome, I Am Ready: Delhi Minister Satyendar Jain