Talking about his own vision of a new India by 2022, PM Modi detailed his government's commitment in building up the country's educational infrastructure. 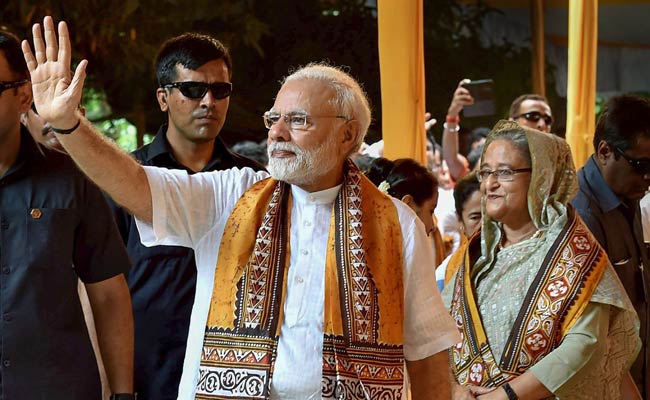 Addressing the 49th convocation of the Visva-Bharati University, PM Modi said Nobel laureate Rabindranath Tagore was still a global citizen and recalled his vision for education.

"During my foreign visits, I have witnessed how people there fondly remember their association with Tagore and his visits. Tagore was, and even to this day, continues to be a global citizen," said PM Modi, also the Chancellor of the university built by Tagore in Bolpur sub-division in West Bengal's Birbhum district.

"Gurudev used to believe every human being is here with a distinct aim and education plays a very significant role in enabling him or her to achieve that target. That is why, he used to say education is not just only which is imparted in schools," said PM Modi.

"He wanted the students to learn about how things are happening across the world, how people live in foreign countries, their social values and cultural ethos. But at the same time, he also wanted people to retain their Indian-ness," said the Prime Minister.

Talking about his own vision of a new India by 2022, PM Modi detailed his government's commitment in building up the country's educational infrastructure.

The Prime Minister said "125 crore Indians have resolved to build a new India by 2022 and eminent institutions like these have a major role to play. Such institutions provide new energy, new directions to the youth".

He said the Central government will be spending Rs 1 lakh crore in the next four years under Revitalising of Infrastructure and Systems in Education (RISE), a scheme to shore up educational facilities.

"Besides spending Rs 1 lakh crore under RISE for strengthening the education system, the government has initiated the Higher Education Financing Agency (HEFA) with Rs 1,000 crore investment to give a major push for creation of high quality infrastructure in premier educational institutions," he said.

An initiative of the Ministry of Human Resource Development (MHRD), HEFA would be formed as a Special Purpose Vehicle (SPV) within a public sector undertaking (PSU) bank/government-owned Non Banking Financial Company.

He also said 2,400 schools have been identified under the Atal Tinkering Labs to promote an innovative mindset among young students.

Atal Tinkering Labs are dedicated work spaces where students (Class 6-12) learn innovation skills and develop ideas. The labs are powered to acquaint students with the state-of-the-art equipment such as 3D printers, robotics and electronics development tools, Internet of Things (IoT) and sensors.

The lab activities are designed to light the spark of creativity, and go beyond regular curriculum and text book learning.

PM Modi, along with his Bangladesh counterpart Sheikh Hasina, also inaugurated the Bangladesh Bhavan within the campus. It features a museum that showcases Tagore's association with the country, the Liberation War of Bangladesh and Indo-Bangla relations.

Promoted
Listen to the latest songs, only on JioSaavn.com
"India and Bangladesh are two nations but are linked through cooperation and coordination. Be it culture or public policy, we can learn much from each other. The example of that is Bangladesh Bhavan," added PM Modi.