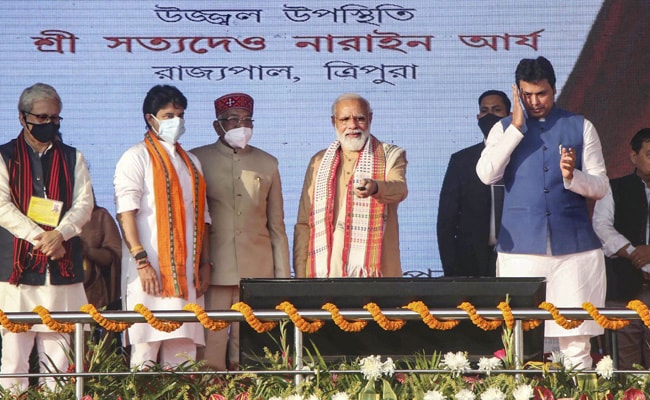 The main opposition party in Tripura has blamed Prime Minister Narendra Modi and his mega rally in Agartala earlier this month for the unprecedented surge in Covid cases in the capital -- the positivity rate in Agartala is nearing 30 per cent and the overall positivity rate of the state is 13 per cent.

The Communist Party of India-Marxist (CPI-M)-led Left Front on Sunday said, "The central and state governments are aware about omicron, the new variant of Covid-19 creating havoc across the country. In this situation the PM's public rally has further aggravated the situation in Tripura".

PM Modi addressed a rally in Agartala on January 4 after which he inaugurated the new integrated terminal building of the Maharaja Bir Bikram Airport in Tripura. A huge crowd had gathered at the programme to catch a glimpse of him.

Soon after the event, the Trinamool Congress had also accused PM Modi of "pushing thousands of lives into danger" and "turning Tripura into a Covid manufacturing hub" with his rallies.

At least 1,070 new positive cases were detected in Tripura on Sunday while three people died due to the infection. A night curfew is in place to contain the recent surge in the state.

The Left leaders said that the Tripura government has not yet installed machines for genome sequence analysis of suspected samples of omicron and such a lacunae would make the situation more critical.

Mr Chaudhury, also a CPI-M central committee member, said that thousands of people are coming to Tripura by train from different parts of the country, including Delhi, and they de-board at various stations where there are no testing facilities.

Meanwhile, the Tripura Chief Minister has advised people to strictly follow the COVID-19 guidelines and stay in self-isolation if they observe any related symptoms. "This is, indeed, true that the positivity rate in Agartala Municipal Corporation area has taken an alarming turn. Yesterday, the positivity rate of the AMC areas was 28.23 per cent which is much higher than normal," Mr Deb said on Sunday.

He clarified that the state government has no intention to impose curfew in the daytime.