How Much PM Modi Donates And To Whom, His Office Lists In Tweets

The BJP has long portrayed PM Narendra Modi as a selfless worker who does not use his position and clout to amass wealth - an image contested by the opposition. 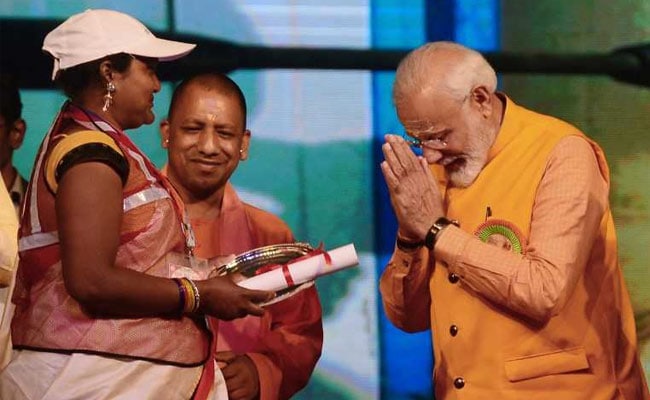 Days after he was seen paying his respects to sanitation workers by washing their feet on national television, Prime Minister Narendra Modi's office on Wednesday announced that he has donated Rs 21 lakh from his personal savings to the corpus fund for the welfare of those who toiled at the Kumbh Mela.

Last month, after a dip at the Sangam in Prayagraj for the Kumbh Mela, Prime Minister Narendra Modi washed and wiped clean the feet of five "safai karmcharis" who had won the "Swachh Kumbh Swachh Aabhaar" award - an acknowledgement for the efforts to keep the grounds clean.  Kumbh Mela, a timeless tradition sees millions coming to take a dip at the confluence of Ganga, Yamuna and the mythical Saraswati. In view of the crowd, keeping the mela grounds clean is a challenging task.

Dubbing the sanitation workers "karmayogis" (saints focussed on work), he said, "These safai karamcharis were my brothers and sisters who were waking up early, sleeping late, all to ensure the cleanliness of the area. They did not want any praise but they were doing their jobs without any fuss".  The moment, he said, "would stay with me for my life".

Today, sharing a number of instances of the PM raising and donating money, the Prime Minister's Office tweeted, "This is just the latest in the series of such steps taken by PM Modi."

Prime Minister Narendra Modi donated Rs. 21 lakh from his personal savings to the corpus fund for the welfare of sanitation workers of Kumbh Mela.

This is just the latest in the series of such steps taken by PM Modi.

Recently, on receiving the Seoul Peace Prize a few days ago in South Korea, he had immediately announced that the entire prize money of Rs. 1.3 crore prize money will be donated towards Namami Gange, to help clean the holy River Ganga.

Recently in an auction of his mementoes received by Narendra Modi during his tenure as PM, Rs. 3.40 crore were collected, which are also being donated to the cause of Namami Gange.

Earlier, Prime Minister Modi had again initiated the auctioning of gifts he received till then in 2015. 8.33 crore rupees were raised during an auction held at Surat, The amount raised went to the Namame Ganga Mission.

Upon completion of his tenure as CM of Gujarat, Narendra Modi donated Rs 21 lakh from personal savings for educating Gujarat government staffs' daughters.

Narendra Modi had also raised Rs 89.96 crore by auctioning all gifts he received as chief minister and donated this to the Kanya Kelavani Fund. The money was spent on the education of girl child, through the scheme.

The BJP has long portrayed Prime Minister Narendra Modi as a selfless worker who does not use his position and clout to amass wealth. In December 2016, weeks after announcing demonetisation as a move to curb corruption, the Prime Minister had delivered one of his most iconic lines at a political rally, saying, "I'm just like a fakir. Will walk on with just my jhola (bag)."

The opposition, however, has countered this narrative, accusing his government of egregious crony capitalism, favouring industrialists perceived close to him, and boosting the election war chest of the BJP which has built the world's biggest office by any political group in the heart of Delhi.

Time Has Come To Ensure Change Of Government In 2024: Sharad Pawar At Opposition Rally