Jammu And Kashmir: Severe cold wave continued in Jammu and Kashmir, and Ladakh with the minimum temperature continuing to hover several degrees below the season's average. 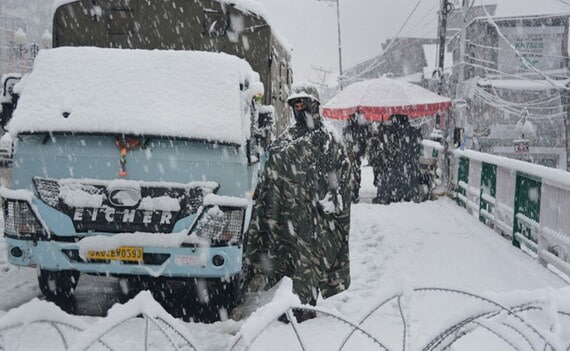 On Friday, several flights were cancelled, while no flight operations took place on Saturday

Cold wave conditions continued in north India on Monday with Jammu and Kashmir and Ladakh bracing for a fresh spell of snow and rainfall, while flight operations at the Srinagar airport remained suspended for the third consecutive day due to poor visibility caused by heavy fog.

Wintry conditions prevailed in Delhi on Monday with the minimum temperature settling at 7.7 degrees Celsius.

The maximum temperature in the city was recorded at 23.5 degrees Celsius.

Severe cold wave continued in Jammu and Kashmir, and Ladakh with the minimum temperature continuing to hover several degrees below the season's average.

"An active western disturbance is most likely to affect the UTs of J and K and Ladakh from Tuesday night to December 14 forenoon. Under the influence of this weather system, widespread moderate rain or snow is expected in Jammu, Kashmir and Ladakh regions," a meteorological department official said.

He said light rain or snow would commence at a few places in Kashmir on Tuesday night and thereafter increase in intensity and distribution.

"The main activity of this system will be moderate to heavy rain or snow, most likely during December 12 and 13 and gradual decrease thereafter," the official said.

Drass, the second coldest inhabited place in the world, witnessed an increase of over five notches in the night temperature, which settled at minus 21.4 degrees Celsius, while Leh was freezing at a low of minus 14.9 degrees Celsius against the previous night's minus 16.0 degrees Celsius, he said.

He said Srinagar, which was reeling under cold wave over the past week, recorded a low of minus 2.9 degrees Celsius -- 2.3 degrees below the season's average, bringing some sort of relief to the people.

The winter capital, Jammu, also marked an improvement in the night temperature, which settled at 8.9 degrees Celsius, 1.1 degrees below the normal during this time of the season, the official said.

Kupwara town in north Kashmir was the coldest recorded place in the valley with a low of minus 4.3 degrees Celsius despite marking an improvement of over one degree, the official said.

Katra, which serves as the base camp for the pilgrims visiting Vaishno Devi shrine in Reasi district of the Jammu region, recorded a low of 8.4 degrees Celsius, the official said, adding the Bhadarwah township of Doda district was, however, the coldest recorded place in the region with a minimum temperature of 1.8 degrees Celsius.

Flight operations at the Srinagar airport remained suspended for the third consecutive day on Monday as all flights to and from the Kashmir Valley were cancelled due to poor visibility caused by heavy fog, officials said.

"All flights at Srinagar airport were cancelled on Monday and no flight operations took place for the third straight day," an official of the Airports Authority of India (AAI) said.

He said the visibility at the airport was very poor due to heavy fog and the conditions were not suitable for flight operations.

Authorities in the valley closed primary schools on Monday due to adverse weather conditions as heavy fog engulfed most parts of the valley.

Divisional Commissioner, Kashmir, Baseer Ahmad Khan ordered the closure of all government and private primary schools on Monday in view of the adverse weather conditions, the officials said.

They said the decision was taken in view of the heavy fog which has been prevailing in the valley for the past few days.

The one-way civilian traffic resumed on the 270-km Jammu-Srinagar National Highway on Monday, after a day-long closure to complete some repair work and smooth passage of security convoys, traffic department officials said.

"Only Srinagar-bound traffic was allowed to move on the highway, the only all-weather road linking Kashmir with rest of the country, this morning with 1 pm as cut off timing," the officials said.

The highway was closed for civilian traffic on Sunday to allow road maintenance agencies to carry out necessary repair work on the road damaged by recent landslides in Ramban sector and also to allow smooth passage of security convoys from both sides.

Cold weather prevailed in Punjab and Haryana on Monday as minimum temperatures continued to hover below normal at several places.

Adampur in Punjab was the coldest in the state recording a low of 4.7 degrees Celsius.

Among other places in Punjab, Amritsar recorded a minimum of 7.2 degrees Celsius, a meteorological department report stated here.

Cold wave conditions continued in Rajasthan where Alwar and Pilani were the coldest places recording a minimum temperature of 6.8 degrees Celsius, the meteorological department said.

Gangangar and Churu recorded night temperatures of 7.2 and 7.4 degrees Celsius respectively, it said.

Pali, Vanasthali (Tonk), Chittorgarh, Bikaner, Ajmer and Jaipur recorded minimum of 8, 8.5, 8.6, 8.8, 9.5 and 10 degrees Celsius respectively, while the minimum temperature in other areas was above 10 degrees Celsius.