Who Is President Ram Nath Kovind 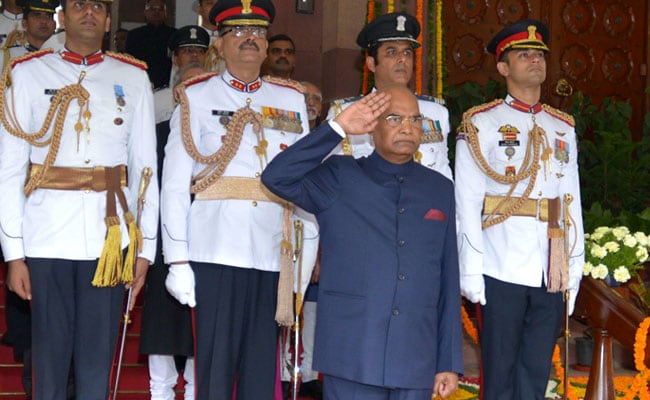 New Delhi: Ram Nath Kovind, former Bihar governor, was sworn in today as the 14th President of India. Mr Kovind, 71, "will make an exceptional President", Prime Minister Narendra Modi had tweeted soon after his nomination for the country's top post. As an experienced lawyer, his "knowledge and understanding of the Constitution will benefit the nation," Mr Modi had emphasised.

Mr Kovind, who is a Dalit, is a farmer's son and his humble origins and simple lifestyle was stressed by BJP leaders.

He was named Governor of Bihar by the centre three years ago. He is a former leader of the BJP's unit that represents Dalit and served two terms as a member of the Rajya Sabha. He is a trained lawyer who has appeared at the High Court and Supreme Court.

He worked as a top aide to former Prime Minister Morarji Desai and has represented India at the United Nations in New York.

By selecting Mr Kovind as their presidential nominee, the BJP-led NDA moved to consolidate its support among lower castes and poorer voters.

BJP chief Amit Shah had earlier said that Mr Kovind "comes from a Dalit family and has struggled a lot. We hope he will be the unanimous candidate for the election."

To win over the opposition, Prime Minister Narendra Modi had personally spoken to Congress leaders Sonia Gandhi and his predecessor, Dr Manmohan Singh, as also to the Chief Ministers of Bihar, Odisha and Andhra Pradesh. All allies of the BJP were also informed of its decision, Mr Shah had said.

Promoted
Listen to the latest songs, only on JioSaavn.com
With the support of regional parties like the TRS of Telangana and the AIADMK of Tamil Nadu, the BJP easily got Mr Kovind elected against former Lok Sabha speaker Meira Kumar backed by a 17-member bloc of opposition parties.

Mr Kovind, the government-backed candidate, won nearly 66 per cent of the votes cast by an electoral college of MPs and state lawmakers on July 17. "I realise it is a great responsibility," the 71-year-old had said at his home in Delhi.