Limited infrastructure is posing to be a challenge for Varanasi airport to handle the traffic during the ongoing 15th Pravasi Bharatiya Divas in the city. 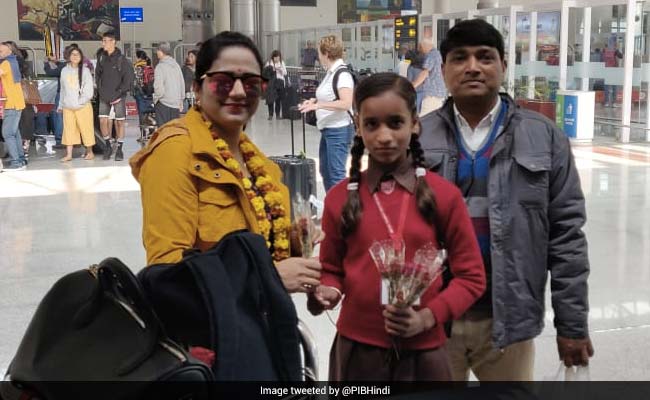 Pravasi Bharatiya Divas: Guests being welcomed with flowers at the Varanasi airport.

The Varanasi airport is struggling to handle the increased air traffic in the wake of the 15th Pravasi Bharatiya Divas (PBD), which begins today.

"Limited infrastructure is posing to be a challenge. We are minutely observing movement of aircrafts and are deciding where and how to park the incoming flights," Varanasi Airport's director Anil Kumar Roy said.

The airport handles 32 to 33 flights daily including international flights with no night operations. In the coming three days, many choppers and private planes are also expected to arrive with the guests attending the Pravasi Bharatiya Divas, increasing the air traffic load enormously.

"Our traffic movement has increased enormously. Sometimes we have to handle six to seven aircraft at a time along with the additional aircraft that have been parked here," said the official.

"The coming three days will be a challenge for us as both the Prime Minister and the President will be arriving and there will be an increase in the VVIP movement at the airport," he added.

The airport has been decorated to welcome the guests from as many as 193 countries who are expected to participate in the Pravasi Bharatiya Divas celebrations.

With a special lounge for the guests, the airport has been decorated with a beautiful "rangoli" to welcome the guests in traditional way with 'tilak' and 'rudraksha' garlands.