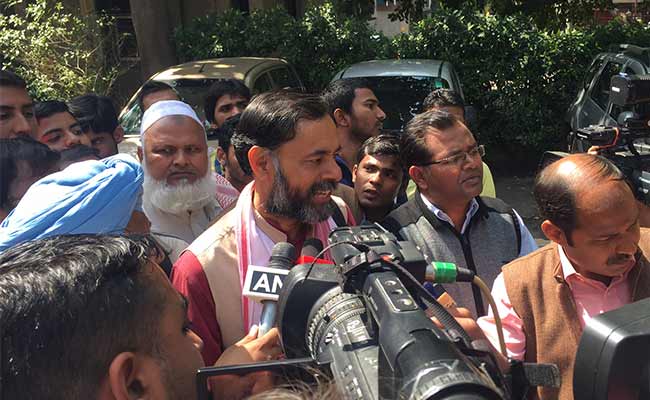 The duo, in a joint letter to volunteers, gave point-by -point clarifications to all the allegations levelled against them by top brass of the AAP including Deputy Chief Minister Manish Sisodia, Sanjay Singh and Gopal Rai.

They, however, hoped to work for party unity in future as it was an "opportunity to strengthen" AAP, saying the organisation was much bigger than any individual.

Mr Yadav and Mr Bhushan claimed that the rift between Mr Kejriwal and them started after the Lok Sabha polls when the AAP chief favoured forming a government again in Delhi with the support of Congress which they opposed leading to a division in the party.

"Kejriwal was adamant on formation of government. We opposed this and insisted that it would send a very wrong signal among the volunteers across the country, as Congress had recently been rejected by Delhi voters completely.

However, Arvind Kejriwal went ahead with his efforts on formation of government and he continued till a month prior to elections," reads the letter.

The leaders also rejected the allegation that they were releasing some very confidential communications, saying if they wanted they could have made public some secret papers which would have really harmed the party.

"It was also very strange that after the Lok Sabha elections, Mr Sisodia, Sanjay (Singh) and Ashutosh demanded that all members of Political Affairs Committee (PAC) should put in their papers so that Mr Kejriwal could restructure new PAC. Even demands were made to disband national executive also. So it was pertinent to oppose those unconstitutional moves," the letter says.

One of the emails, dated November 28, quotes Mr Bhushan as saying that he will have to "disassociate" himself from the selection process and would be compelled to raise the issue on an "emergency basis" with the National Executive.

"I know that we had decided to leave the management of Delhi to Arvind Kejriwal, but sitting in the PAC to approve candidates, I cannot be a rubber stamp for arbitrary, non-transparent and questionable decisions on candidate selection, without following even minimum norms of transparency and due diligence," it said.

The leaders wished also speedy recovery for Mr Kejriwal who is undergoing diabetes treatment in Bengaluru.

"We hope that Arvind Kejriwal would come back in Delhi soon and sort out the things in a way that party's unity and soul be working together... We would continue to work for the betterment of the party," the letter added.

In the letter, the duo also rejected allegations that they wanted to remove Mr Kejriwal from the post of National Convenor saying they had opposed any such move instead.

"In the NE meeting held on February 26, when we came to know that Arvind Kejriwal has offered his resignation from the post of national convener, we both vehemently opposed that," they said.

The letter also raised questions on the party's expansion plans saying Mr Kejriwal had taken an "unilateral" decision not to contest assembly elections in Maharashtra, Jharkhand, Jammu and Kashmir and Haryana.

"Though, the decision of not contesting the elections in those states proved to be right, however, question still persists over what would be the right approach to take such decisions in future," it said.

Yogendra Yadav and Prashant Bhushan also slammed the party's decision to give ticket to Amanatullah, who was accused by police of mongering communal tension and whose arrest Arvind Kejriwal had subsequently demanded.

The letter said the party never wanted to have a detailed probe into Mr Singh's purported SMS asking party volunteers to join BJP and instead accused them of being "biased" towards him.

"You tell me, if a volunteer approaches us for a fair trial, isn't it our duty to hear his voice in an unbiased manner?" asks the statement.

The duo also raised questions over the party's candidate selection and distribution of poll tickets.

"Was it not our duty to raise an alarm about the candidates having dubious background who were given tickets by setting aside all the principles and fundamentals of the party? Rather, party should have honoured our views, but we were accused of involving anti-party activities," the statement noted.

"After we pushed this, a committee was formed to investigate into our concerns. The internal Lokpal scrutinized background of 12 candidates.

Two candidatures were cancelled, four were found innocent while six were allowed to file the nomination papers with riders," reads the letter.

The letter also rubbished charges that Mr Yadav planted the stories in media which harmed the party. "Other journalists present in the meeting have written their articles and have straightforwardly denied to have been being briefed by Yogendra Yadav. If they were briefed, then why other journalists did not write their pieces," the statement questioned.

The duo also put out a disclaimer saying that the views expressed in the letter did not include Shanti Bhushan's as "for we have publicly expressed our differences with his views."

Commenting on the letter, party leader Ashish Khetan took a jibe at the two and said their basic premise that if AAP had to grow it had to lose is "childish". "...the allegations in the National Executive that they wanted the party to lose if it had to progress. We found this logic too childish. It would have been death of party principles if BJP would have formed the government," Mr Khetan said.

Earlier, releasing the letter to the media, Mr Yadav told reporters that it was an attempt to initiate a "truthful dialogue" refusing to comment further.

"We have replied to the questions that were raised and now would like to maintain silence and would like to request all the party colleagues and workers to do the same," he said.

Promoted
Listen to the latest songs, only on JioSaavn.com
Later Mr Bhushan said that it was their duty to bring out the "true facts" before the volunteers adding that they were ready to face a Lokpal inquiry.

"AAP was not meat to become like any other political party, which compromises on all their principles. Our fight is to ensure that the party remains true to its founding principles," the senior lawyer said.