Prashant Bhushan was held guilty of contempt of court for tweets criticising Chief Justice of India SA Bobde and the top court. 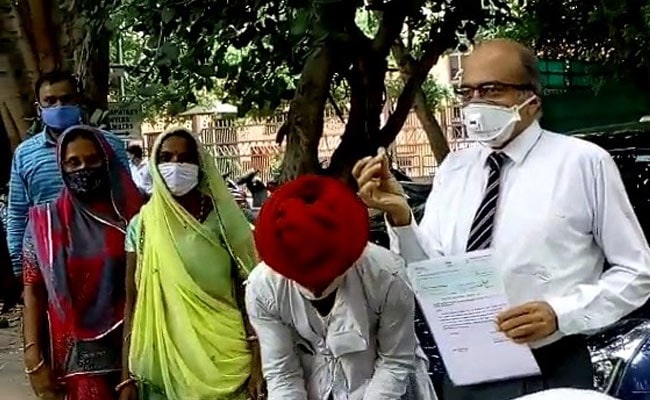 Prashant Bhushan was accompanied by a group of people as he entered the top court premises.

The top court had said he can face jail for three months and a ban from practising for three years if he doesn't pay the fine by September 15.

Mr Bhushan, 63, was accompanied by a group of people from Rajasthan as he entered the Supreme Court premises. "This has been collected by a lot of people. They had run the one rupee campaign," he said as he took out a Re 1 coin from the man next to him and held it up. Mr Bhushan submitted the fine of Re 1 through a demand draft.

He was held guilty of contempt of court for tweets criticising Chief Justice of India SA Bobde and the top court.

"A truth fund has been created, (with) each Re 1 (given by people). We will use the truth fund to help those who are being harassed for speaking out," he said.

He also referred to the arrest of former Jawaharlal Nehru University student Umar Khalid for his alleged role in the Delhi riots and the naming of CPI(M) leader Sitaram Yechury and Swaraj Abhiyan chief Yogendra Yadav in a disclosure statement of an accused in the Delhi riots. "The government is using all sorts of tactics to shut down criticism. The truth fund has been established to help all those people," he said.

He has approached the top court, seeking a review of the August verdict.

"Just because I'm submitting the fine does not mean I have accepted the verdict" he said.

The Supreme Court, which had asked for an unconditional apology from the lawyer had said in August, "We gave several opportunities and encouragement to (Prashant Bhushan) to express regret. He not only gave wide publicity to the second statement but also gave various interviews to press."

The court was apparently referring to Prashant Bhushan's statement refusing to retract his comments or apologise, saying he considered it the discharge of his "highest duty" and apologising would be contempt of his conscience and the court. Mr Bhushan had also said that open criticism was necessary to "safeguard the democracy and its values."

After the verdict, Mr Bhushan had said he will "respectfully pay the fine".

In another contempt case involving his comment in 2009 that half the 16 Chief Justices of India were corrupt, top court last week asked the Attorney General to assist the court in deciding the larger issues in the case against Mr Bhushan.