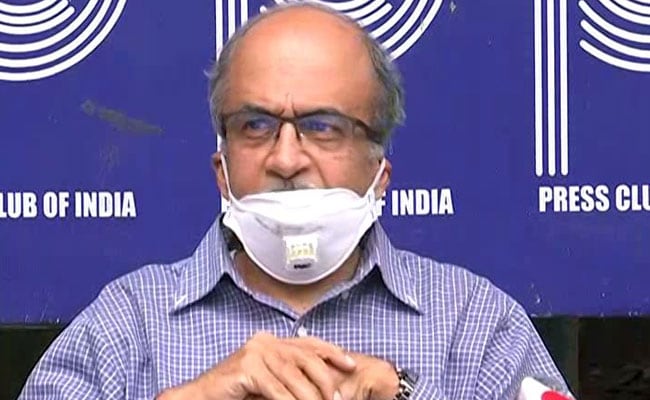 Lawyer-activist Prashant Bhushan has moved the Supreme Court seeking the right to appeal against his conviction last month in a criminal contempt case, arguing there are chances of "arbitrary, vengeful and high-handed decisions" in criminal contempt cases because the court was the aggrieved party.

Arguing that the right of appeal was a "fundamental right guaranteed under the Constitution and is also guaranteed under international law", Mr Bhushan said: "This acts as a vital safeguard against wrongful conviction and would truly enable the provision of truth as a defence".

Mr Bhushan, 63, who was found guilty of contempt of court - for tweets criticising Chief Justice of India SA Bobde and the top court - and fined Re 1, also said he wanted his plea to be heard by a larger and different bench.

"In such cases, considering the fact there is inherent unavoidable conflict of interest... and the fact that liberty of the alleged contemnor is at stake, it is of utmost importance that certain basic safeguards... which would reduce (though not obviate) chances of arbitrary, vengeful and high handed decisions," his plea said, according to news agency PTI.

Under the present statutory scheme, a person convicted for criminal contempt has the right to file a review petition, but that plea is decided in chambers by the bench usually without hearing the contemnor.

The lawyer had been convicted in a criminal contempt case involving two tweets - one of which said four previous Chief Justices had played a role in destroying democracy in India over the past six years.

The court sought an unconditional apology from him, maintaining that freedom of speech was not absolute. "You may do hundreds of good things, but that doesn't give you a license to do ten crimes," the court said.

The court also cited Mr Bhushan's high standing in the legal community, and said: "Had it been someone else, it was easier to ignore".

Mr Bhushan refused to apologise for his comments, arguing that he did not foresee any "substantial change" in his position and said that his tweets were "discharge of highest duty".

Open criticism is necessary to "safeguard the democracy and its values," he had said, adding that he would cheerfully accept punishment.

At his hearing Mr Bhushan's lawyer, Rajiv Dhavan, argued the Supreme Court must and should take extreme criticism as its "shoulders are broad enough". Attorney General KK Venugopal also argued against punishment.

"Bhushan's tweets seek the improvement of the administration of justice... Let democracy follow in this case when he has exercised his free speech... It will be tremendously appreciated if the court leaves it at that," he had said.

Mr Bhushan had earlier expressed regret in another contempt case where he said half of the 16 Chief Justices of India were corrupt. The comment was made during an interview to Tehelka magazine in 2009.